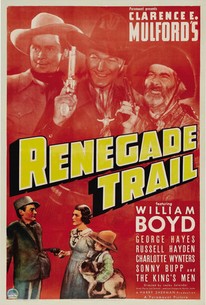 Hopalong Cassidy (William Boyd) once again embarks on a mild romance with a mature woman in this average Western filmed at Lone Pine, CA. The woman in question is one Mary Joyce (Charlotte Wynters), who calls herself a widow. But there is a husband lurking in the background, Smokey Bob Joslin (Russell Hopton), an escaped jailbird Mary would rather forget. Joslin is in cahoots with a gang of cattle rustlers and it is up to Hoppy and his two sidekicks, Lucky Jenkins (Russell Hayden) and Windy (George "Gabby" Hayes), to take care of business before Mary's young son, Joey (Sonny Bupp), learns the demoralizing truth about his ne'er-do-well father. As a nod to the then so popular singing cowboy Westerns, Renegade Trail features two songs, "Lazy Rolls the Rio Grande" and "Hi That, Stranger," both written by Foster Carling and Phil Ohlman and performed by Eddie Dean and the King's Men quartet. This was the final Hopalong Cassidy entry to feature George "Gabby" Hayes, who left the series over a contract dispute. Hayes was eventually replaced with veteran slapstick comic Andy Clyde.

There are no critic reviews yet for Renegade Trail. Keep checking Rotten Tomatoes for updates!

There are no featured reviews for Renegade Trail at this time.