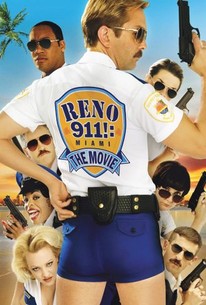 Critics Consensus: Reno 911!'s anarchic brand of comedy loses much in translation to the big screen where it feels slapdash and shallow.

Critics Consensus: Reno 911!'s anarchic brand of comedy loses much in translation to the big screen where it feels slapdash and shallow.

Critic Consensus: Reno 911!'s anarchic brand of comedy loses much in translation to the big screen where it feels slapdash and shallow.

The bumbling cops of Comedy Central's hit television series take a trip to Miami Beach for a national police convention. After the trip there turns out to be much more difficult than anticipated, the bumbling crew must leap into action when the convention center becomes the target of a biological terrorist attack. Lieutenant Jim Dangle (Thomas Lennon) must keep together his motley and inept crew in order to save everyone from the disaster, and keep peace on the streets of the popular Florida city. The film features the same cast from the popular Comedy Central series of the same name.

Lennie Loftin
as Chief of Police

Paul Rudd
as Ethan the Druglord

David Wain
as Breen the Plumber

Being this unfunny should be illegal.

It's the poor man's Police Academy VII: Mission to Moscow.

Like some deformed offspring that's been walled up in an attic for 20 years, this resurrects the spirit of Police Academy.

A morass of mediocrity.

Fails to raise even a titter.

Maddeningly hit-or-miss, Reno 911! plays as if the filmmakers were aiming simply to outclass Police Academy 5.

The jokes are old and worn out, and the TV show's quick pace, which is so integral to its humor, is laboriously drawn out over 84 minutes.

Reno 911!: Miami has an actual plot that keeps getting in the way of the comical cops-versus-freaks action.

Lowbrow hilarity for adult fans of the TV comedy.

There are a few very funny moments in this thankfully short 77 minutes, but nowhere near enough ideas or gags to sustain a feature-length version of this TV show.

Like a really poor one trick version of Police Academy. Based on a TV show apparently, it shows as they barely had enough material to fill 75mins!

Reno 911 is a fairly decent / average comedy. Based on the popular TV show, Reno 911 Miami is a fun, amusing film with a few good laughs. But at times the humour displayed on screen, struggles and falls flat and isn't funny. For what it is, Reno 911 Miami is an average comedy. The film could have been better, but there's definitely a few great moments that makes this film a worthy viewing. The film is not as memorable as Super Troopers, but it will definitely give you a few chuckles. For what it is, Reno 911 is a good comedy but it could have been improved on many aspects. The show was funny to a certain level, but at times the humour seems forced. Overall a an average comedy with definitely a few good laughs. But nothing really extraordinary.