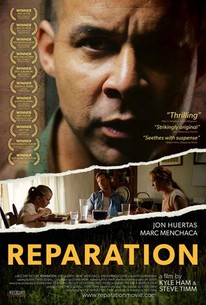 Reparation is the story of a troubled veteran who finds clues to his buried memories in his daughter's art, while confronted by a figure from his past looking for answers of his own. Bob Stevens (Marc Menchaca) struggles with a three-year hole in his memory. And when a mysterious stranger (Jon Huertas) comes to town claiming to have been his best friend from the Air Force Police, Bob's peaceful existence rapidly unravels. His entire family is caught in the storm, but none more than his eight year-old daughter who discovers she has inherited her father's missing years... stowaways on her DNA. The past is now.

Christopher B. Westbrook
as Billy

Ham has crafted a suspenseful and thrilling film with well developed characters and an atmosphere that draws you into their world.

There are no featured audience reviews yet. Click the link below to see what others say about Reparation!