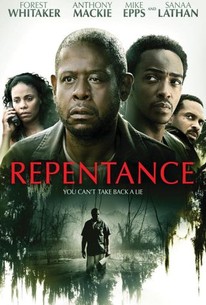 Years after a drunken car crash that almost took his life, Tommy Carter has reinvented himself as a therapist/spiritual advisor who advocates a synthesis of world religions and positivity. He's parlayed this vocation into a successful book release that one day draws the attention of Angel Sanchez, a profoundly troubled man fixated on the "untimely" death of his mother. When Carter takes on Sanchez as a personal client in an effort to raise funds for his indebted brother Ben, things quickly take a turn for the worse. Angel needs much more than a simple life coach. -- (C) Lionsgate

A movie of modest means that nevertheless offers a fairly cohesive story and at least one standout performance.

Despite convincing performances, the fatal flaw is the attempt to meld two genres together that don't quite work.

Repentance likes to imagine it traffics in shock, but it's the kind of movie where everyone and everything is exactly as they appear.

The Silence of the Butler!