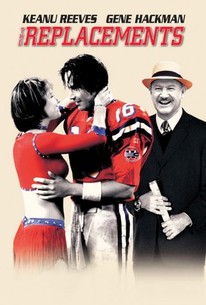 Critics Consensus: The cliched characters and obvious outcome make all the fun and excitement amount to nothing.

Critics Consensus: The cliched characters and obvious outcome make all the fun and excitement amount to nothing.

Critic Consensus: The cliched characters and obvious outcome make all the fun and excitement amount to nothing.

The 1987 National Football League players' strike inspired this sports-themed comedy. The Washington Sentinels are one of the strongest teams in pro football -- until contract negotiations break down and the Sentinels go on strike. Determined to play the team's schedule, owner Edward O'Neil (Jack Warden) recruits a ragtag band of scab players, to be headed up and whipped into shape by the retired veteran coach Jimmy McGinty (Gene Hackman). At the top of the recruitment list is quarterback Shane Falco (Keanu Reeves), a promising athlete until a catastrophic defeat in the Sugar Bowl dashed his confidence. Joining Falco on the team are Clifford Franklin (Orlando Jones), a receiver who can't catch the ball; Nigel Gruff (Rhys Ifans), a chain-smoking Welsh soccer player; Bateman (Jon Favreau), a former cop with anger management problems; Fumiko (Ace Yonamine), a sumo wrestler new to football; and Wilkinson (Michael Jace), a convict on parole to the Sentinels. Can McGinty mold his new squad of misfits and no-hopers (who truly love the game) into a winning team? Brooke Langton plays Annabelle, head of the Sentinels' cheerleading squad (who has to contend with replacements of her own), and football commentators John Madden and Pat Summerall appear as themselves. ~ Mark Deming, Rovi

Zachary I. Young
as Kid in Liquor Store

Robert Vique
as Man on the Street #1

Milinda A. Jefferson
as Sentinal Cheerleader

Critic Reviews for The Replacements

This negligible comedy might as well come with a bouncing ball so members of the audience can recite the dialogue along with the actors.

A haphazard film about half as sophisticated as the average beer commercial.

A field goal, not a touchdown.

The Replacements, as with just about everything else coming out of Hollywood, merely reconfigures the same predictable gross-out jokes, sentimental platitudes, and decorative sex that figure into half the screenplays in circulation.

Plenty of red meat here but also so much script rot that both ought to be recalled by the FDA.

There isn't a football cliche "The Replacements" doesn't tackle, but its all-star cast and easygoing approach make it one of the more enjoyable recent sports comedies.

average lighthearted entertainment ... to be queued up more than normal in the coming months with a potential NFL lockout and strike looming

At least the ending doesn't cop out. There is no big happy ending where everyone gets a pro football gig or a big Nike ad campaign.

Football flick has a great lineup, but fumbles the ball.

The Replacements is a bad movie, but a likable one.

Wearing the same blank expression that's become his trademark, Reeves proves that after 15 years in movies he still can't deliver a joke.

Audience Reviews for The Replacements

One of the worst things I have ever had the misfortune of watching. Cliche writing, terrible acting, this movie gets very little right.

Not so much a sports movie but rather a sports fantasy fried in buckets of greasy charm. Still watchable but only just.

I'm not a huge fan of sports movies in general, but this was semi-descent. It's kind of so wacky that you almost can't enjoy it on some level. The cast worked good together and I actually think that it's one of Keanu Reeves best performances.