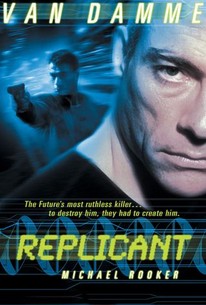 This $17 million direct-to-video production by Hong Kong director Ringo Lam is the story of a fire-obsessed serial killer (Jean-Claude Van Damme) and the recently retired cop (Michael Rooker) intent on stopping him. After finding his hair follicle at a crime scene, a secret government agency clones the killer in the hopes that the replicant will aid in the search. Although he's full-grown, the clone (also played by Van Damme) has the emotional and mental capacity of a young child. Soon the naïve replicant begins to have visions of past murders and an abusive mother, leading him to escape and seek the killer on his own. ~ Skyler Miller, Rovi

Jean-Claude Van Damme
as The Torch/Replicant

Nick Swarts
as Jake
View All

The action sequences are well staged and credit where credit is due: The 40-year-old martial artist still has the physical goods, executing 180 splits and gymnastic stunts with the grace and apparent ease of someone much younger.

Slightly less awful than most of Van Damme's efforts.

Replicant doesn't even come close to some of Van Damme's better flicks (Timecop and Sudden Death), but it's certainly an improvement over what he's been up to lately.

I was surprised to find "Replicant" wasn't too bad at all.

People looking for a movie that offers conversational debate on a controversial dilemma should look beyond this one-dimensional decoy.

The whole trying affair is irresistibly dopey. Kinetic, too.

Claude Van Damme plays two roles; a brutal serial killer, Edward "The Torch" Garrotte with a taste for young mothers - killing them before burning them and the replicant of the same killer (because clones clearly have psychic connections to their evil originators) created in a government laboratory for one reason only: to help a cop find this killer. Michael Rooker is the ex-cop who had been assigned to the "The Torch" case and who gets the job of babysitting the "replicant". OK the plot is ridiculous but who watches a Van Damme film for the plot? You watch it for the violence and action and I had a Damme good time watching it lol.

didnt finish it wont to though reli good film

Preposterous thriller stars Jean-Claude Van Damme not once but twice, playing a clone of himself. The original Van Damme is a vicious serial killer terrorising Seattle. The second Van Damme is a clone of the killer, created with the hopes of being used to track down the original. It plays as silly as it sounds, a sci-fi rehash of several genres with as much flair and excitement as dead grass. The production values are higher, but the acting and script are direct-to-video masterpiece.

What can I say, I'm a sucker for Ringo Lam movies. He does a good job on this one and the story is compelling. With this, Hard Target and In Hell I'm shocked I like as many Van Damme movies as I do.