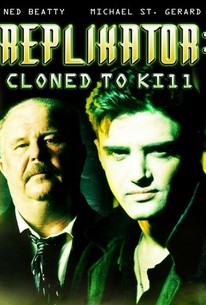 In this futuristic science fiction drama, two firms are both on the working overtime to see who can be first to perfect a new and groundbreaking invention -- a technology that can perfectly recreate human tissue, allowing people to be replicated at will. One of the companies is a small, cutting-edge concern, while the other is a major multinational conglomerate, and in a world where such companies control the legal and judicial system (hey, are you sure this is science fiction?), beating them to the punch can have deadly consequences. The larger firm sends a team of thugs to destroy the smaller company's offices, just as inventor Ludo (Michael St. Gerard) is using himself as a guinea pig for his final tests on the replication system; things go haywire during the assault, and soon Ludo finds himself chasing his own manmade evil twin. Replikator also stars Ned Beatty, Brigitte Bako, and Ilona Staller, the latter better known as Cicciolina, the Italian adult film star who was elected to that nation's Parliament. ~ Mark Deming, Rovi

There are no critic reviews yet for Replikator: Cloned to Kill. Keep checking Rotten Tomatoes for updates!

There are no featured reviews for Replikator: Cloned to Kill at this time.