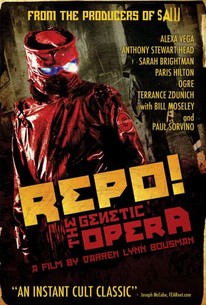 Critics Consensus: Bombastic and intentionally gross, Repo! The Genetic Opera has a unique style but lacks the wit and substance to be involving.

Critics Consensus: Bombastic and intentionally gross, Repo! The Genetic Opera has a unique style but lacks the wit and substance to be involving.

Critic Consensus: Bombastic and intentionally gross, Repo! The Genetic Opera has a unique style but lacks the wit and substance to be involving.

Saw series mainstay Darren Lynn Bousman reunites with Twisted Pictures producers Oren Koules and Mark Burg for this futuristic shocker detailing a terrifying epidemic of organ failures. The denizens of planet Earth have been devastated by inexplicable and widespread organ failures, and as a result scientists begin planning a substantial organ harvest. Though an innovative biotech conglomerate subsequently offers the fearful public a means of maintaining their health by enacting a series of hassle-free organ payment plans, things begin to get messy when it's revealed that the financed body parts are subjected to legal default, and that failure to maintain proper payment will result in forceful repossession of the organs. Paul Sorvino and Spy Kids' Alexa Vega star alongside celebrity socialite Paris Hilton in the Lionsgate film. ~ Jason Buchanan, Rovi

Falling somewhere between Rocky Horror, Moulin Rouge! and Eyes Without A Face (with songs!), Repo! The Genetic Opera is the filmic equivalent of what architects call a 'folly'.

As it has evolved from a 10-minute cabaret piece, through a short film Bousman made in Toronto, to the big screen, Repo! The Genetic Opera has gained in both guts and gusto.

David Cronenberg might have made a great movie with the plot to Repo! The Genetic Opera.

It's not often you come across a film as unique as this, and while my taste for liver, lights, and sweetbreads isn't what it once was, this is still a fine post-Halloween aperitif, with guts to spare.

I hated this movie.

Essentially, it's a brave, bold and brash piece of film-making that deserves to find a cult home on DVD.

What I love most about Repo! is how fun the music is. While not everyone is a trained singer, they all bring an electric energy to the performances.

I'm at a loss to say whether any of this is good or bad, and whether "good and bad" are meaningful words in the first place.

The case for its quality is solid, the music is catchy, and "Repo!" may just destined for cult royalty.

In my life time, there have been few films that have taken over my mind, entranced me, or even became a staple in my subconscious as this indie horror/ rock opera. Now, is it a great film? No. It is not. In fact, I would not even call it good. It's okay if nothing else. Well, seeing as how it was made with half of the budget of Saw IV, what is one to expect? But, now you are wondering why it is that I have given this film a perfect five star rating? Simple: it's entertaining, original, and created the first real horror musical. Now, the main idea of this film deal with a post apocalyptic world where everyone is being killed via organ failures. So, GENco is created to satisfy the need for organ replacements. But, there is a catch: if you don't pay your bills, the Repo Men come for you. And when they find you, your time is up. The cool thing is that the above is not the plot of the film. That is just the backdrop. There is no real plot to Repo! because the entire film is made up of all these different back stories that just happen to connect in one way or another. As a director, I will say that this film will probably be Darren Lynn Bousman's masterpiece, and that is being generous because he is not that good of a director. There are some very questionable parts in this film that should have been tweaked a bit, reedited, and synced better with the music. But for what he has given us, it's not bad. Better than any of his SAW films. But what really makes me love this film is one person: Terrance Zdunich. Z (as I will call him) is what is needed in this world in terms of musicals: originality. By the time I am writing this review, he has made two musicals and both of them are better than they should have been. The secret is that he takes music that is underground and brings it to the realm of show tunes. Each of the 64 pieces that were composed for this film are absolutely wonderful and actually could have worked as a concept album. His music styles brings a freshness to the idea of stage plays and musicals, the end result being him probably leading a revolution - a renascence - of rock operas that we have not really seen. In short, the music in this film is unique, different, and actually pretty good. The cast of this film is something also of a shock. First off, you have people like Anthony Head from Buffy The Vampire Slayer and Alexa Vega from Spy Kids in on this. First off, what?! Second off, wow. Hearing them preform is really what makes this film work. They have this chemistry on screen that appears believable and their voices are not that bad to listen to. In fact, most of the cast (including Paris Hilton) are not that bad. But only two people steal the show with their voices: Paul Sorvinno and making her gorgeous debut: Sarah Brightman. Both performers I have complete respect for and this film just enhances my love for both. Even more hearing Brightman's beautiful soprano voice. If nothing else, their voices make this film work and worth while. So, is this a good film? No. It's okay from a critical perspective. But it is entertaining to watch, at times wonderful to look at (take this part lightly), and in this critic's book, a great film. As I have said, there are some films that just change our lives and become a part of us. Repo! The Genetic Opera is one of those films that is a staple of my years of being a teenager, has had a huge impact, and is still thought of fondly four years after it was made.

I enjoyed the concept of Repo! The Genetic Opera, however this film doesn't rival The Rocky Horror Picture Show. The film is very elaborate and effective, and does have good music. The film was directed by Darren Lyn Bousman who previously cut his teeth on a few Saw films. Produced by Twisted Pictures, Repo! The Genetic Opera is a good enough, modernized horror musical with plenty of gore for today's new breed of horror fans. I enjoyed this film, however I felt that it wasn't especially great, I thought that it would be very good, considering some of the review in horror circles, but I felt slightly disappointed in the film. Not saying that it's bad, quite on the contrary, I'm just saying that this film was slightly overhyped. Repo! will surely please gore fans, as the film doesn't lack in blood and gore. The songs are good, and Paris Hilton's screen time isn't too bad either (surprisingly), this film is a good enough film to watch, or despite the fact that it's not as good as The Rocky Horror Picture Show, Repo! The Genetic Opera is still a memorable viewing experience. If you've enjoyed the Saw films, then you'll most likely going to enjoy this film. A good blend of music, horror and plenty of gore make this a must see for horror fans. Repo! The Genetic Opera is a fairly eccentric musical, but considering the horror aspects of the film, what do you expect? An interesting addition to the horror musical genre, Repo! The Genetic Opera is a film that will stick you for some time.

Shilo Wallace: Why oh why are my genetics such a bitch? "Not Your Parent's Opera" Repo! The Genetic Opera is not nearly as bad as the plot description may indicate. It actually has a pretty cool and atmospheric feeling to it, but I would be lying if I said I didn't grow tired of it fairly quick. Some scenes are awesome, stylish and just just downright brilliant, but more than not the scenes are stupid and badly done. It's a strange, strange film that isn't like anything you've seen before. It has a Nightmare Before Christmas feeling to it at times, but obviously much more violent and the songs are not nearly as good. As a short film, maybe 45 minutes, this would have been awesome, but there's just not enough there to make an hour and a half musical. The filmmakers tried to make something cool and at times it is, but in the end it will just have you saying "What the fuck did I just watch?" Repo! is inventive and original, which is always nice, but it may have tried a bit too hard to distance itself from other movies. It's a nice try, but I didn't particularly care for it.

TERRIBLE MOVIE. Allow me to save the average man allot of time. I attempted to watch this movie, but it's like some sort of sick goth sadism movie. I have nothing against splatter-house films, but this film was cheesy as cheese itself. This is a disaster and I hate you. I hate you 73% of the audience who enjoyed listening to the terrible tale of the organ man. Ugh, three thumbs down. It has nothing to do with the gore in this movie, not at all. I'm actually quite resistant to gore infested gross-out movies, but this movie avoids the gore at all costs. Mainly because the movie is in extreme dept. No realistic effects... no good effects... someone I know who watched the movie along with me said he thought this movie was actually pretty funny due to the cheese effects. I know I don't mean to troll (like someone said a few seconds ago to me, catching me in the act of writing a bad review), but I dislike this trash (thumbs down on movie).