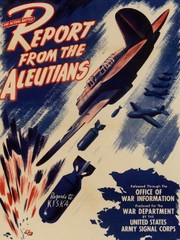 Report from the Aleutians

Report from the Aleutians Reviews

Grant S
May 8, 2018
A dull, dry, even annoying telling of what should have been an interesting story.

I was intrigued by this documentary as the Aleutians campaign is not covered much in history books or documentaries. Directed by the great John Huston, with some rare footage, what can go wrong?

Well, actually, a lot. The biggest problem is that John Huston decided to narrate the movie himself. His delivery is incredibly off-putting: flowery, bombastic, verbose and all about style rather than substance. Yes, it was a propaganda film, so a bit of salesmanship was required, but a bit more subtlety would have helped the message go down.

The content itself, while showing the daily operations on the US forces in the Aleutians, especially the USAAF, well, doesn't have much of the bigger picture. All we know is the US are on one island, Adak, and the Japanese are on another, Kiska, and the Americans are bombing Kiska on a regular basis. (Don't get me started on how many times Huston says "Kiska"! I grew sick of the word quite quickly). That's it.

Eric H
½ September 9, 2015
I decided to watch some wartime documentaries made by John Huston during World War II starting with this one which took place at the outpost of Adak concerning a bombing mission over Japan-occupied Kiska. Huston narrates with some additional voice overs by his father, Walter. Suitable mood music permeates most of the film which adds to the color footage's appeal. When the actual flying sequences are shown, one gets some sense of excitement though since dialogue is kept to a minimum and there are few explosions, it doesn't seem Hollywood-made to provide unbridled joy to victory. Worth seeing. Watched this on Internet Archive.
Page 1 of 1