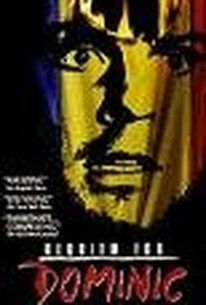 This Austro-German film is based on a true story of the horrors of Communist Romania. Felix Mitterer plays Romanian exile Paul Weiss, who returns to the city of Timisoara to investigate the disappearance of his childhood friend Dominic Paraschiv (August Schmlzer) Weiss is informed by the authorities that Paraschiv, a chemical plant worker, has been imprisoned for the terrorist murder of eighty coworkers. The charge is a baldfaced lie, created to "excuse" the brutal prison treatment of the mildly militant Dominic, whose "crime" was to criticize the government and to lead his beleagured coworkers in prayers. Grainy videotaped footage of the real-life Dominic Paraschiv on his deathbed (after being "liberated" by the new Romanian government) brings the film to a numbing conclusion. ~ Hal Erickson, Rovi

Nicolas Vogel
as Nick
View All

There are no critic reviews yet for Requiem für Dominik (Requiem For Dominic). Keep checking Rotten Tomatoes for updates!

There are no featured reviews for Requiem für Dominik (Requiem For Dominic) at this time.