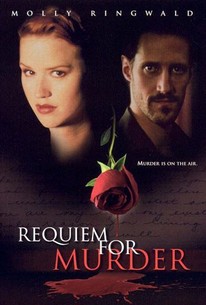 Someone is poisoning beautiful women and influential men with a very rare vintage of red wine while listening to classical music on WZIN-FM, 95.8 on the Philadelphia radio dial. Detectives Lou Heinz (Chris Heyerdahl) and Samantha Parks (Lynne Adams) discover the rather elegant murders occur during the nighttime shift of disc jockey Anne Winslow (Molly Ringwald), and that the killer may be leading up to slaying Anne herself. Heinz decides to protect Anne personally and follow her on her date with the creepy music professor Richard Poe (Chris Mulkey) -- good thing, too, because Poe winds up attempting date rape. Poe seems the likely suspect for the murders, but Heinz can't make the charges stick, and the killings continue. Don't look now, but Anne and Poe are reunited as moderators for a big benefit concert, which gives Poe a very tempting opportunity to see his obsession through to the end. But then there's a twist.

Michael Brousseau
as Conductor
View All

Critic Reviews for Requiem for Murder

...may be worth a look if you ever wondered what [Ringwald] would look like as a brunette (answer: weird).

What's that smell? Good lord, it's this Molly Ringwald vehicle.

There are no featured reviews for Requiem for Murder at this time.