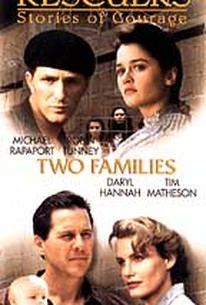 This film from the "Rescuers" series, based on true stories of Christians who helped save the lives of Jews during World War II, concerns a woman (Robin Tunney) who becomes involved with a man (Michael Rappaport) who has been exiled to a Jewish ghetto by the Nazis. Meanwhile, a couple who run a travelling circus (Daryl Hannah and Tim Matheson) help Jews attempting to escape the Holocaust by allowing them to travel with their group as performers. Barbra Streisand served as Executive Producer for this film, produced for the Showtime premium cable network.

Dalene Irvine
as Gerda
View All

There are no critic reviews yet for Rescuers: Stories of Courage---Two Families. Keep checking Rotten Tomatoes for updates!

There are no featured reviews for Rescuers: Stories of Courage---Two Families at this time.