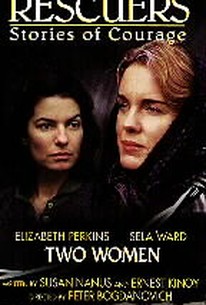 Based on Rescuers: Portraits of Moral Courage in the Holocaust, a book by Gay Block and Malka Drucker, this made-for-cable drama was intended as the first of a trilogy inspired by the same literary source. The film is divided into two segments, both set in Europe during WWII. Scripted by Ernest Kinoy, "Mamusha" stars Elizabeth Perkins as a Polish-Catholic nanny who saves her orphaned Jewish charge by literally hiding the child in plain sight, posing as the child's mother. And "The Woman on the Bicycle," adapted by Susan Nanus, features Sela Ward and Fritz Weaver in the story of a fearless French resistance fighter who smuggles secret papers for the Allies while going about her daily cheese deliveries (this same character was fictionalized in the 1963 theatrical epic The Longest Day). Executive-produced by Barbra Streisand and directed by Peter Bogdanovich, Rescuers: Stories of Courage -- Two Women made its Showtime cable debut on October 5, 1997.

Theresa Tova
as The Abbess

Cori Atlin
as Rebecca
View All

Two stories of Christians in Europe who risked their lives to help Jews being persecuted by the Nazis.

There are no featured reviews for Rescuers: Stories of Courage---Two Women at this time.