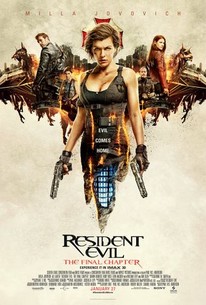 Critics Consensus: Resident Evil: The Final Chapter may prove mind-numbingly chaotic for the unconverted, but for fans of the venerable franchise, it offers a fittingly kinetic conclusion to its violent post-apocalyptic saga.

Critics Consensus: Resident Evil: The Final Chapter may prove mind-numbingly chaotic for the unconverted, but for fans of the venerable franchise, it offers a fittingly kinetic conclusion to its violent post-apocalyptic saga.

Critic Consensus: Resident Evil: The Final Chapter may prove mind-numbingly chaotic for the unconverted, but for fans of the venerable franchise, it offers a fittingly kinetic conclusion to its violent post-apocalyptic saga.

The human race's last hope against apocalyptic obliteration is super soldier Alice (Milla Jovovich), but she's been stripped of her psychic powers. She must form alliances and rally survivors in Raccoon City for the climactic battle against the Umbrella Corporation and its ravenous hordes of the undead. This sixth installment of the video game-inspired franchise is directed by Paul W.S. Anderson (AWP: Alien vs. Predator).

Ever Anderson
View All

The film comprises 20 per cent boring plot talk and 80 per cent even more boring action.

The action scenes are choppy and move so quickly, it made me dizzy. Some scenes are so dark, you can't see what's happening, and the movie took itself too seriously - basically, sucking the life of the series.

Perhaps you need to be a Resident Evil completist to get the finer points of the plotting.

This one, Resident Evil: The Final Chapter, ties up all the narrative loose ends, although we were never in Maltese Falcon territory

Anderson, along with partner and star Milla Jovovich, have given the dwindling fans of the series a limp and lifeless simulacrum of what a Resident Evil movie looks like.

If anything can be gleaned from a signifier like "The Final Chapter," it's that this almost certainly is not the last one; but it really should be.

It has some good scenes in the first half, but sadly the latter half of the plot was poor, undoing what little momentum and plot it had for a re-run of the 3rd film's climax.

It does not help the accumulation of nonsense and ridiculous desperate moments. [Full Review in Spanish]

No matter how you might feel about the movies (hint: they're bad), there's something remarkable about the creative willpower and bizarre vision necessary to turn one so-so video game movie into a six-deep franchise.

The Resident Evil franchise as a whole [is] so profoundly past its sell-by date that every sequel feels like a nostalgic revival of something that never actually went away.

Jovovich has been doing this so long, she could practically sleepwalk through these films at this point... The rest of the cast might as well be computer generated, because they are practically non-existent.

With Resident Evil: The Final Chapter, Paul W.S. Anderson brings an end to this long-running franchise. As humanity teeters on the verge of extinction Alice takes on one last mission to return to Raccoon City to steal a cure to the T-virus that could end the Zombie Apocalypse. The plot is extremely contrived, beginning with a laughable retcon of the series that creates all kinds of continuity issues. And the action scenes are fairly rote and don't have any real stakes to them (as Alice is practically invincible). Still, some of the big zombie battles are entertaining. Running on empty, Resident Evil: The Final Chapter is one of the weakest entries in the series and doesn't have much to offer.

For a B movie its not so bad. Once again the star is the reason to watch, although the director has a few tricks up his sleeve. That Anderson resorts to quick cutting every action scene gets fuggin annoying.

Long standing fans will enjoy this final chapter to the popular series. It's as equally a fast tension paced thrill ride that offers a few jumps along the way!