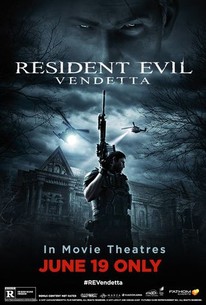 It transforms its heroes into walking stereotypes, sexist caricatures, or both. [Full review in Spanish]

Simply put, it's an absolute blast and I can't wait for more!

The occasionally cool-looking moments aren't enough to make up for the tedious pace and horrible script. The voice actors did the best that they could with the material, but there's no vaccine for this movie.

It's worth a watch for sure, but it's also certain to be appreciated by fans of the franchise moreso than others.

The anime-inspired action is intermittently entertaining, but story, voice acting and animation are dead rubbish.

Even though I enjoyed it just as much as the previous animated films I expected it to be abit more grounded just like the fresh and fantastic Resident Evil 7 game and it started off that way trying to add a little more horror but soon fell back into its old self which I was fine with but I thought with how different Resident Evil 7 was they would do the same with this too, Leon doesn't take centre stage as much in this one as Chris and Rebecca are back to please fans, The story was the same old Resident Evil plot, Yet again it's the action what steals the show with some great animations and zombie killing action there's even one scene where Leon goes full on John Wick on a couple of dozen zombies which was brilliant, I was disappointed that it had no connection to Resident Evil 7 as it is set before the events of the game and we were all hoping it would answer a few questions the game ending left but no, If anything it felt like a Resident Evil 6 DLC, It's still a great animation Resi film that will please the action fans but if you're hoping for something like or connects to Resident Evil 7 then it will leave you more annoyed than the ending of Resi 7 game.