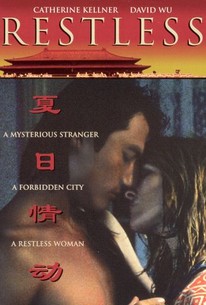 East meets West in the changing landscape of Beijing on the cusp of the 21st century in this romantic comedy-drama. Leah Quinn (Catherine Kellner) is an American in her early 20s who has decided to spend some time in China. While studying weiqi, she becomes romantically involved with her teacher, Sun Zhan (Geng Li), a self-styled hipster by night who, during the day, hosts a tacky television program. Meanwhile, Richard Kao (David Wu) is a young American of Chinese heritage who is visiting the country for the first time. He's brought with him the ashes of his grandfather, who wanted them to be scattered in the Chinese village of his birth. As he acquaints himself with the family he's never known, Richard gains a new appreciation for his cultural heritage -- and becomes infatuated with a neighborhood girl, Lin Qing (Shiang-chyi Chen). Restless was the first ever American-Chinese co-production, and marked the first feature for writer/director Jule Gilfillan.

There are no critic reviews yet for Restless. Keep checking Rotten Tomatoes for updates!

There are no featured reviews for Restless at this time.