Resurrect Dead: The Mystery of the Toynbee Tiles2011

Resurrect Dead: The Mystery of the Toynbee Tiles (2011) 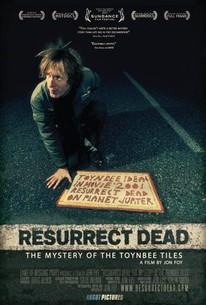 Resurrect Dead: The Mystery of the Toynbee Tiles Photos

Strangeness is afoot. Most people don't notice the hundreds of cryptic tiled messages about resurrecting the dead that have been appearing in city streets over the past three decades. But Justin Duerr does. For years, finding an answer to this long-standing urban mystery has been his obsession. He has been collecting clues that the tiler has embedded in the streets of major cities across the U.S. and South America. But as Justin starts piecing together key events of the past he finds a story that is more surreal than he imagined, and one that hits disturbingly close to home. -- (C) Official Site

News & Interviews for Resurrect Dead: The Mystery of the Toynbee Tiles

View All Resurrect Dead: The Mystery of the Toynbee Tiles News

Critic Reviews for Resurrect Dead: The Mystery of the Toynbee Tiles

Pieces together an irresistible puzzle.

Who's the street artist behind these tiles? More importantly, who cares?

Filmmaker Jon Foy sets it to a thriller's pace, even contributing his own fateful score.

Riveting, innovative and provocative are just three of the adjectives that never occurred to me while watching the documentary "Resurrect Dead: The Mystery of the Toynbee Tiles."

...a skillful yet fairly ordinary festival film that tells a moderately intriguing story ...

If you know nothing about the tiles, the film might play like an urban mini-thriller. It's never entirely satisfying, however, and the filmmakers seem to run out of steam before their story is told.

Resurrect Dead is a consideration of how the material world can intersect with imagined worlds.

A terrific sleeper doc that somehow finds a way of pulling you into its investigation and makes you wonder about what drives people to do the things they do.

Detective documentaries, those that themselves attempt to unlock mysteries or follow subjects who do, can be some of the most satisfying to watch, and Resurrect Dead is no exception.

Documentary subjects are seldom this mysterious.

Audience Reviews for Resurrect Dead: The Mystery of the Toynbee Tiles

The investigators' tenacity inspired me, and their deep empathy with the introspection and paranoia of the Toynbee tiler. Their conjecture is a satisfying enough explanation of the "Toynbee idea, Kubrick's 2001, resurrect dead on planet Jupiter" for me. Their proposed idea is so big and philosophical, that it's worth the wait.

This is a very well made doc and a great mystery. I loved how it all unfolded and the finale of their journey was a great ending to the film.

Interesting documentary that says as much about mental illness as it does about mysterious cryptic tiles.

"Toynbee Idea In Movie 2001 Resurrect Dead On Planet Jupiter" I'll start out by openly admitting that I am overrating this as a film. It isn't the most amazing documentary(technically speaking, that is), but I believe it is the most fascinating thing I have ever had the fortune of watching. I was glued to this documentary for 86 minutes and when it was over; I wished I could have more. I hadn't heard of this until I ran across it on Netflix, and I'm sure glad I did. As I can see from Netflix and this site, pretty much no one has seen this film yet; but I can see it getting a huge cult following in the years to come. I feel stupid because I have never heard of the Toynbee Tiles. How could this be? This is one of the most interesting topics I have ever come across and I think the fact that I had absolutely no knowledge of it before hand made it that much more special to me.  Let me explain a little about the movie. It's a mystery investigation by three individuals who were drawn to the Toynbee tiles. For everybody not in the know about the Toynbee tiles; they are tiles that give a message about resurrecting everyone who is dead on the planet Jupiter. This idea was first presented by a scientist named Toynbee, and I guess the topic of this resurrection of life was explored in the famous Kubrick film, 2001. This movie actually gave me a better understanding as to the ending of 2001, but I digress. So these tiles have been laid on the streets of big cities in America that range from New York City to D.C. to Kansas City and they even stretch to regions of South America. The mystery comes from the fact that no one knows who's laying them. That's what these three people are trying to find out in Resurrect Dead. And guess what, they succeed. Obviously I'm not going to give away any of the information they find because that would destroy the mystery aspect of the film. I was so drawn in by this movie that I have found myself actually researching this topic online. It's just fascinating to me and I'm sure there are people out there that will find it stupid and that's okay. To me, Resurrect Dead was one of the most entertaining documentaries I have had the pleasure of watching. In many ways it reminded me of Exit Through a Giftshop and the legend of Banksy. This guy has been laying these tiles for decades and absolutely no one knows who he is or how he is doing it. The tiles are on major highways where there is always traffic. How can it be done? As you'll see in the film from emailers; there are many ideas on how the tiles got there. It all just adds to the fun of the mystery. I implore you to seek this film out. Watch it as soon as possible. It isn't time consuming, so if you find it completely ridiculous and stupid, you won't lose much of your life on it. If it has the same effect on you that it did me, it will be more than worth the watch. This is a new favorite of mine and a complete surprise. Words can't describe how much I loved this whole experience and the mystery of the Toynbee tiles.

Resurrect Dead: The Mystery of the Toynbee Tiles Quotes