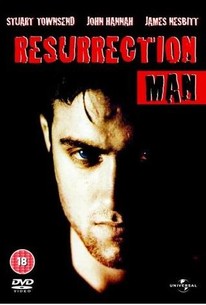 A searing drama about the violence of, and in, men unfolds in 1975 Northern Ireland. Ruthless sociopath Victor Kelly rides high as the feared and hated ringleader of a gang of killers. Kelly's combination of classic style and contemporary smarts has kept him untouchable, until obsessed journalist Ryan vows to infiltrate his cabal and get to the "Resurrection Man" himself. Rising U.K. star Stuart Townsend ("Trojan Eddie," and the upcoming "Shooting Fish" and "Under The Skin") stars as Victor for director Marc Evans ("House of America"), with James Nesbitt ("Welcome To Sarajevo," and Gramercy's April release "Go Now") as Ryan. Also starring are John Hannah ("Four Weddings And A Funeral," "Sliding Doors"), Geraldine O'Rawe ("Circle Of Friends"), and Brenda Fricke (Academy Award" winner for "My Left Foot"). Eoin McNamee (Gramercy's "I Want You"), adapted the screenplay based on his novel. The film is produced by Andrew Eaton and directed by Marc Evans.

There are no critic reviews yet for Resurrection Man. Keep checking Rotten Tomatoes for updates!

There are no featured audience reviews yet. Click the link below to see what others say about Resurrection Man!