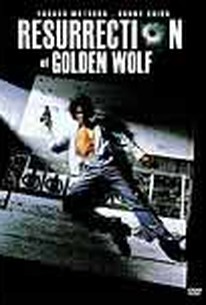 A super-villain with no scruples at all starts off this complex, twisting, turning action film that continues its gyrations for more than two hours. The villain wants to wrest control of a large corporation from the Japanese mafia. To that end, he commits about every type of crime on the books, including trapping a woman into heroin addiction, dropping her once he has the information he wants, and then taking up with the daughter of the company's president. The vile cad gets his due from the woman he jilted, though that is not the end. At least, it is not his end yet and it is still only the beginning of the story. ~ Eleanor Mannikka, Rovi

There are no critic reviews yet for Resurrection of Golden Wolf. Keep checking Rotten Tomatoes for updates!

There are no featured audience reviews yet. Click the link below to see what others say about Resurrection of Golden Wolf!