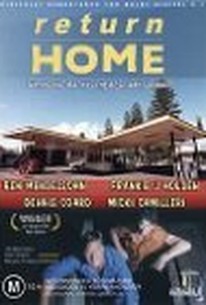 Australian cinematographer Ray Argall made his directorial debut with this low-key drama about a man coming back to his hometown and trying to make a new start. Dennis Coard is Noel, a successful insurance broker from the city who decides, after a brutal divorce, to forsake city life and return to his boyhood home. Moving back to the seaside town of Adelaide, he re-experiences the old gas station that his father once owned. Now his older brother Steve (Franklin J. Holden) is running things in partnership with his wife Judy (Micki Camilleri). Noel also meets Steve's prize mechanic Gary (Ben Mendelsohn), an awkward teenager who has just had a nasty separation from his girlfriend Wendy (Rachel Rains). As Noel observes the hometown folk and their daily troubles, he realizes what he has been missing in the mad, big-city rush. ~ Paul Brenner, Rovi

There are no critic reviews yet for Return Home. Keep checking Rotten Tomatoes for updates!

There are no featured reviews for Return Home at this time.