The Return of Frank James1940 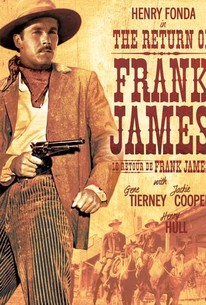 The Return of Frank James Photos

This Technicolor sequel to 1939's Jesse James does without the services of the earlier film's star Tyrone Power, who after all was shot dead by that "dirty little coward" Bob Ford (John Carradine). Repeating his portrayal of western outlaw Frank James, Henry Fonda is promoted to top billing here. As depicted by scenarist Sam Hellman, Frank has retired from his life of crime to become a peaceful farmer, though he has never given up his search for the treacherous Ford. The killer and his cohorts are eventually rounded up, but are pardoned due to political intervention. That's when Frank slaps on six-guns once more to seek his own form of justice. Featured in the cast is Henry Hull as a top-of-his-lungs crusading newspaperman and Jackie Cooper as a headstrong young sprout who pays the ultimate price for his bullheadedness. Making her screen debut is Gene Tierney, in the role of an Eastern reporter who wants to tell Frank's true story to the world.

George Barbier
as Ferris the Judge

Louis Mason
as Wilson the Watchman

Critic Reviews for The Return of Frank James

As a snapshot of what mindless popcorn cinema looked like in 1940, it's a flattering example, still watchable and breezy even if it's not remotely challenging on any level.

The abstruse stylization of Rancho Notorious is still a decade away, though the frontier is already a severe plain enlivened by intimations of hellfire

Gets by with its remarkable photography (an early attempt at color for Lang), crisp action sequences and breezy storytelling.

The film is short on action but long on courtroom melodrama, not a good balance for a routine Western.

Audience Reviews for The Return of Frank James

Average western, sequel to "Jesse James" with none of Lang's more familiar mood touches. Still not bad with Fonda strong in the lead. Gene Tierney is very green, lovely but a bit stiff and missing the sense of concealed hysteria under the placid exterior that the years and tragedy would bring to her best work.

A Fritz Lang Western sounds mighty strange, but it is good.

This sequel to the 1939 Jesse James sees his brother Frank hunting down those responsible for his death. And I must say I've never seen such a bloodless warpath. We are are used to the way films can romanticise outlaws, but this one really takes the cake; Henry Fonda's Frank makes Robin Hood look like Charles Manson! The only crime he commits is a robbery (for very good reasons of course) and the of the men he is hunting, one (or rather the most unconvincing dummy in cinematic history!) falls off a cliff and the other dies before he gets a chance to shoot him. For most of the film Frank is far more interested in romancing Gene Tierney than revenge (although who could blame him for that...) Fritz Lang is clearly not comfortable with this genre; it all feels very static and the wishy washy technicolor does not suit his visual style. But it is the overly simplistic script that is by far the biggest handicap of this film. It's kept watchable by the amiable cast, but it's hardly the finest moment of anyone involved.

[font=Century Gothic]"The Return of Frank James" starts in 1882 with the murder of outlaw Jesse James by the brothers Ford(John Carradine and Charles Tannen). Jesse's brother, Frank(Henry Fonda), is hiding out in the Ozarks with his ward, Clem(Jackie Cooper), but he has no interest in revenge since he believes the courts will find the brothers guilty. But he is proven wrong when they are immediately pardoned and given the reward money to boot. Sensing trouble, they head west. Frank is swiftly on their trail but first he has to make an unauthorized withdrawal from the local railway office.[/font] [font=Century Gothic][/font] [font=Century Gothic]Directed by Fritz Lang, "The Return of Frank James" is an entertaining technicolor western. Having recently seen "Fury," I was disappointed not to see more on the nature of revenge. And the very dated views on race(although there is one late sequence that tries to reverse this) are offensive, even with an early attempt at feminism. I know this may not be fair but I prefer the recent "The Assassination of Jesse James by the Coward Robert Ford."[/font]

The Return of Frank James Quotes