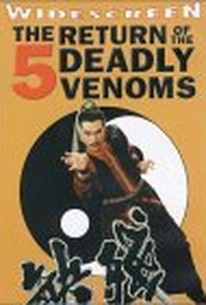 In this classic martial arts adventure (which, incidentally, isn't actually a sequel to Five Deadly Venoms, though it features many of the same actors), Tu Tin-To (Chen Kuan-Tai) and his son (Lu Feng) are unscrupulous warlords drunk with power who will cripple anyone who crosses their path. Five men who have fallen victim to the violence of Tu Tin-To and his son band together -- a blind man (Phillip Kwok Tsui), a deaf-mute (Lo Meng), a man with no legs (Sun Chien), a man who has been rendered an imbecile through torture (Chiang Sheng), and a gifted kung-fu master. The master teaches the four maimed men deadly fighting skills, and they set forth to reclaim their village from Tu Tin-To's reign of terror. Return of the 5 Deadly Venoms, originally titled Can Que, was also released as Crippled Avengers. ~ Mark Deming, Rovi

Critic Reviews for Return of the 5 Deadly Venoms

Some of the most memorable classics of old school Hong Kong martial arts revenge movies are built on gimmicks and this one is a doozy...

Audience Reviews for Return of the 5 Deadly Venoms

Chang Cheh and the venoms create one of their most memorable films. Fantastic stunts, great premise, the usual revenge story but gone the extra mile. A must see.

Return of the 5 Deadly Venoms Quotes