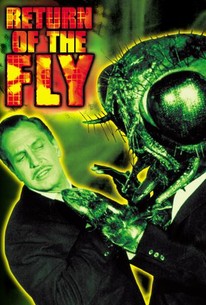 Return of the Fly Photos

This sequel to Kurt Neumann's The Fly (1958) is peculiar, to say the least. Producer/director Neumann had passed away during the summer of 1958, and the studio needed a sequel. The resulting film, Return of the Fly, was directed by Edward L. Bernds, a filmmaker (and former sound man at Columbia Pictures) most closely associated with the Three Stooges, but who had lately moved successfully into popular science fiction, with movies such as World Without End, Space Master X-7, and Queen of Outer Space to his credit -- not that this last, in particular, seemed to qualify him for anything but tongue-in-cheek satire. Curse of the Fly was shot in CinemaScope but in black-and-white, an unusual combination that is usually associated with artier movies, as a compromise for discriminating directors who can't avoid the widescreen format but want to present something serious; in this particular case, however, it was purely a budgetary decision. Vincent Price is the nominal star as Francois Delambre, the brother of Andre Delambre, who died as a result of his experiments with a matter transmitting device in The Fly. It is now a dozen years later, and Andre's son, Philippe (Brett Halsey), has just laid his mother to rest, having witnessed the final years of her life blighted by the memory of the horror of Andre's death. He convinces Francois to tell him what happened and of the device that destroyed his parents' happy life together. Philippe vows to perfect the matter transmitter, so that all of the heartache and sacrifice by his parents will not have been in vain. He employs as his assistant a scientist friend, Alan Hinds (David Frankham), who, unbeknownst to him, has shady business connections and a dark secret in his own past. Alan conspires to steal the secret of the matter transmitter, but first he must dispose of a detective who has come to arrest him for an earlier crime, and then eliminate Philippe, who doesn't know what Alan has done, only that he's hiding something. Thus, the same disaster that befell Philippe's father now occurs again, to him -- his body parts are transposed with those of a house-fly. The human-sized fly, even nastier looking than the monster in the original film, goes on a rampage, trying to catch Alan and get revenge for what has happened to him, using what faculties he has. Meanwhile, Francois gets help from the surviving detective on his brother's case, who knows the truth, and the two try to trap the monster alive and also find the fly-sized creature with Philippe's head and features, so they can try and unscramble the atoms of both. ~ Bruce Eder, Rovi

Joan Cotton
as Nurse
View All

Critic Reviews for Return of the Fly

The first two-thirds are superior to the final stretch.

Disappointing sequel to the classic horror film, "The Fly."

Audience Reviews for Return of the Fly

The fly shouldn't have returned, the story is horrible and so are the special effects, this movie is nothing like the original, and I don't recommend seeing it, unless you're a big fan of Price and just want to see him in another movie.

Obviously, this sequel is nowhere near as good as the original 1958 film 'The Fly', but despite obviously being a cheap follow-up and working from a story that basically just rips off the first film, there are some good ideas here and the film is definitely worth watching. The only actor to return from the original movie is Vincent Price, but the story does lead directly on as in true horror sequel style, in this film we follow the fortunes of the original scientist's son, who naturally decides to follow on his father's experiments. Price isn't the only thing that was recycled for this film, however, as the film was apparently written to incorporate sets from the original, although this does make sense considering how the story follows on. The hapless scientist this time is Philippe Delambre, son of Andre Delambre, and a man who has decided to rebuild the transportation device. Along with his friend Alan Hinds and uncle Francois Delambre, they conduct a series of experiments in the hope of succeeding where Andre failed...but naturally, as nothing runs smoothly in a horror film, events take a turn for the macabre... I'm guessing that black and white film was cheap around 1959 as despite the fact that the original film was shot in colour, this one is in black and white. However, I actually prefer films like this in black and white, so this wasn't a problem for me. Vincent Price took a backseat in the original film, but as his star was rising by the release of this follow-up; he gets a more central role, although he still doesn't appear enough if you ask me. His role here isn't one of his strongest, but anything that features a performance from the great Mr Price is well worth seeing if you ask me. It has to be said that most of the performances (and dialogue) in this film are pretty ridiculous, but among the rest of the cast Brett Halsey, an actor who would go on to make Italian films along with this likes of Mario Bava and Lucio Fulci, stands out as the unlucky scientist. The film obviously isn't very graphic; although it's slightly more violent than the first film, and the transporter machine is put to much better use here. The special effects are inventive too, and work well despite obviously not costing much. Overall, this is at least a worthy follow-up, which while not as great as the original; has its moments and is worth seeing.

Originally made for television, cheesier and less resounding than its predecessor. Still a great B movie for a Friday night.

Return of the Fly Quotes