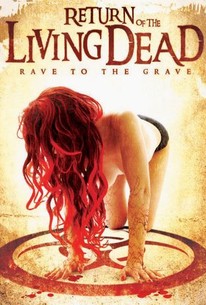 In this sequel to 1985's Return of the Living Dead, a bunch of horny teens discover that their new designer drug is actually a chemical that turns humans into flesh-eating zombies. Unfortunately, they don't make this discovery until they're in the middle of an enormous outdoor dance party, where the wild costumes and chemically induced shenanigans make it difficult to tell who's a zombie and who's simply having a good time. Although it shares plot points, characters, actors, and crew with Return of the Living Dead 4: Necropolis, Return of the Living Dead 5: Rave to the Grave features only a cameo from Peter Coyote, the sole bold-faced name from the previous film. Both movies were co-written by William Butler, who previously acted in 1990's Night of the Living Dead remake, among other horror films.

Mihai Gruia Sandu
as The Mortician

Aurelian Surulescu
as The Guitarist

Critic Reviews for Return of the Living Dead: Rave to the Grave

Ellory Elkayem, you were so good at comedy in "Eight Legged Freaks"-what happened?!

It's cheesy and squirrelly, but at least it's not wretched. If that sounds like the faintest praise with which I can damn something, it's meant to be.

Audience Reviews for Return of the Living Dead: Rave to the Grave

The final film? well who knows but this isn't as bad as I've read and its certainly no worse than the fourth film ('Necropolis'). Basically the same plot lay out with the deadly toxic gas again being mistreated and lost, although this time its turned into a drug which was an interesting twist. Its still pretty dumb though really. The students find these barrels of toxic gunk and decide to test them?! They discover that the chemical have the same type of effect as ecstasy when taken orally...sort of. It actually makes you foam at the mouth and spasm! none the less they name the drug Z for the zombie-like effect it has on a person. Then guess what? they start extracting the chemical, putting it in pill form and selling around school...well that's not totally illegal and dangerous now is it. Apparently you're only suppose to take one pill at a time but guess what...I won't even finish that. So before you can say holy squelching zombie balls...there are zombies everywhere. The story does follow on from the last film and has the same surviving cast members which is good but for some reason they don't seem to know what the gas is or what it can do as if the last film never happened. Yet this film does follow on from the last for sure as the characters all have the same names. I suppose they may not have seen the canisters in the last film but its still a bit odd, never the less the film plays out much the same as before with people going down one by one as we head towards the rave finale. The makeup is spot on just like the previous films and looks nice n slimy, nothing too new looking but it all works and does the job plus the Tarman zombie (or another version) is back and looking sweet. I think this film also gets back to the humour aspect of the original two films which is good and in my opinion makes it worthwhile and a fitting addition to the series. Even thought the entire premise is absurdly ridiculous...but I guess that also harks back to the classic 80's originals.

If you're a fan of the first Return of the Living Dead movie, please don't watch this one. You'll loose ten years of your life from aggravation. The film is supposed to be set in the United States, but was actually shot in Romania and most of the actors' accents are worse than Jurgen Prochnov's on a good day. The Return of the Living Dead: Necropolis won't even qualify as a "good bad cult movie" 20 years from now. Parts 2 and 3 were already pretty bad, but this one is just embarrassing. Trash, Suicide and even Julie Walker will roll over in their graves. I wonder if the makers have even bothered to watch the first three films. Unlike Romero's walking corpses, the Return of the Living Dead zombies are not supposed to die when you shoot them in the head! Nor do they give speeches or box. The movie does have one thing going for it, though: it proves that all those B actors they got playing KGB agents in cheap 80s crime flicks got their accents right after all.

Another mindless zombie horror movie. I couldn't make it through the entire movie, it was bad but I've sat through worse movies than this (Date Movie *coughs*) but it just bored me and when a zombie movie bores you, something must be wrong. It's good if you want a few laughs, then again what horror movie (except a select few) isn't? Don't get me wrong I love my horror movies, they just don't make them like they used to anymore.

Return of the Living Dead: Rave to the Grave Quotes