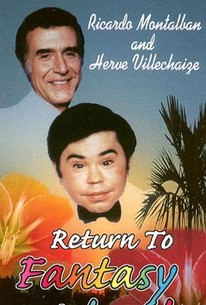 A sequel to the 1977 TV movie Fantasy Island, this film was originally titled Fantasy Island II and slated to air on November, 1977, but was instead re-christened and broadcast as the initial episode of the weekly Fantasy Island series. Once again, six people spend thousands upon thousands of dollars to fulfill their dreams on a lavish island resort overseen by the enigmatic Roarke (Ricardo Montalban) and his dwarf assistant, Tattoo (Herve Villechaize). This time, "de plane" arrives on the island with a passenger roster including Charles Fleming (Horst Buchholz), who allegedly wants to restore the memory of his amnesiac wife, Janet (Karen Valentine); love-struck executive, Benson (George Maharis), and his bitchy boss, Margo Dean (Adrienne Barbeau), whom Benson hopes to woo and win Taming of the Shrew style; and long-married couple Brian and Lucy Faber (Joseph Campanella and Pat Crowley), who yearn to be reunited with the child they gave up for adoption years earlier. Return to Fantasy Island premiered January 20, 1978, on ABC.

Kristine Ritzke
as Carol
View All

There are no critic reviews yet for Return to Fantasy Island. Keep checking Rotten Tomatoes for updates!

There are no featured reviews for Return to Fantasy Island at this time.