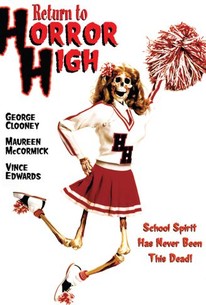 In 1982, Crippen High School was the scene of a gruesome series of dismemberment murders, but the killer was never identified. Five years later, Cosmic Pictures arrives at the long-abandoned campus to make a low-budget horror movie based on the tragedy, and suddenly the terror begins anew. The police department arrives at the school to find the building and grounds covered in gore and human body parts, the remains of the unfortunate film crew. The only survivor of this new massacre is the screenwriter, Arthur (Richard Brestoff), who tries to explain the horrifying events to the authorities. The troubled production's leading lady is angered over the demeaning nature of her role, the producer and director argue over the film's lack of artistic merits, and when cast members start disappearing, everyone else assumes that they're just quitting out of disgust. Who is the culprit? Is it the school's principal, appearing as himself in the film for the sake of realism? The janitor, who hopes to parlay his cameo into a pornography career? Or maybe Steven (Brendan Hughes), who was a student at Crippen during the original murder spree and finds himself reluctantly cast as the hero? This self-referential slasher parody features George Clooney in a small part as the film's first victim, and The Brady Bunch's Maureen McCormick as a policewoman with a lust for blood and hot dogs.

Will Etra
as Mangled Face/Hatchet Face

John B. Mueller
as Jimmy

Larry Spinak
as Peter
View All

The premise is admittedly pretty crafty, but other than that two-minute distraction, Return to Horror High is certainly no great shake.

Return to Horror High is an interested concept for a horror comedy. Told in a series of flashbacks, Return to Horror High is a fine parody of other Slashers. The film is sort of confusing to follow, but is pretty entertaining. The thing that is quite hard to follow is how to tell the real kills, from the fake one The use of flashbacks is a good idea for this film, only if it was told in a way that it would make sense for the viewer. The film is definitely ahead of its time, in the sense that this is one of the first spoofs of the Slasher genre. This is a fun, tongue in cheek horror comedy that delivers some pretty decent kills on-screen. This is an underrated film in the slasher genre, and one that shouldn't be vilified like it has. If you enjoy a good, cheesy comedy horror flick, a neglected gem of 80's horror sleaze, then Return to Horror High is the perfect film for you to watch. The film, along with other B movie Slashers such as Slaughter High and Cutting Class is one of the 1980's most fun Slashers films. Sure, the film won't win any prizes, but for what it is, Return to Horror High is a good cheesy Slasher with a unique idea. Everything is over the top, and this is an entertaining film if you're used to the genre. By the time the 1980's came to a close, the Slasher was uninspired, boring and flat. Films like this one brought an element of cheesy fun to the genre. If you enjoy a cheesy horror flick, then give this one a shot. The film is pretty underrated and it really doesn't deserve the flack it has received. One of the better Slasher spoofs. The only thing is, is that the film is a tad confusing with its flashback sequences, you may be thrown off by which scene is a real kill and which one isn't.

Reasonably good comic slasher which see's a film crew attempt to make a movie in a high school which was the scene of a bloody massacre five years previously where the killer was never caught. It's fun at times and has some bloody scenes but most of the kills are off-screen. We get a bit of George Clooney for the 15 minutes which was fun to see him in something trashy. The film-within-a-film scenes went on for too long though and some of the humour just wasn't funny enough. It may not be the best of the 80s slashers but it's memorable and unpredictable. So if you're in the mood for something different in this horror sub-genre give it a look.

A cheesy 80's horror comedy! It actually does a rather good job at taking early fun out of other 80's slasher films. Yes it briefly even has a young George Clooney. Not scary at all, if anything almost the so bad it's good category, but the fact it making fun of itself, it can get away with it. One for slasher fans......but certainly no Scream!

Oh hello young George Clooney. I couldn't even tell you what's going on, half way through I was like, 'wait, what?!' It's so cheesy, so dumb and really hits home the fact that you should NEVER ask, "_____, is that you?" Because it never is and that's how you end up dead.