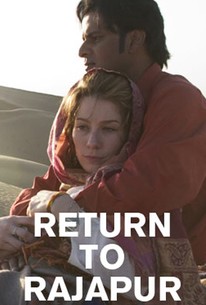 A doomed love affair blooms against the beautiful and exotic backdrop of the deserts of India in this romantic drama. Samantha Hartley (Kelli Garner) is a woman in her early twenties who travels to Rajapur in India to visit a resort where her mother stayed years ago. While tracing the steps of her mother, Sara (Lynn Collins), Samantha learns the true story about her mother's stormy marriage to Jeremy (Justin Theroux), a charming but moody alcoholic. Only a few days after their wedding, Sara began to wonder if marrying Jeremy was a mistake, and while visiting India on their honeymoon, Sara met Jai Singh (Manoj Bajpai), a handsome and sensitive widower living in Rajapur. Jai Singh, who speaks fluent English, soon strikes up a friendship with Sara that quickly grows into a romance, but both are aware of the transgressive nature of their love, and their affair takes a tragic turn, leaving its scars on all parties involved. Return to Rajapur received its North American premiere at the 2006 Tribeca Film Festival.

Bhanu Goswami
as Amar
View All

Critic Reviews for Return to Rajapur

There are no critic reviews yet for Return to Rajapur. Keep checking Rotten Tomatoes for updates!

There are no featured reviews for Return to Rajapur at this time.