Return to the Blue Lagoon1991 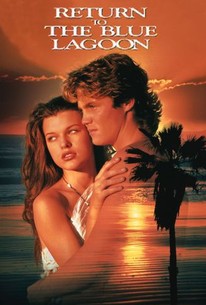 Critics Consensus: Despite its lush tropical scenery and attractive leads, Return to the Blue Lagoon is as ridiculous as its predecessor, and lacks the prurience and unintentional laughs that might make it a guilty pleasure.

Critics Consensus: Despite its lush tropical scenery and attractive leads, Return to the Blue Lagoon is as ridiculous as its predecessor, and lacks the prurience and unintentional laughs that might make it a guilty pleasure.

Critic Consensus: Despite its lush tropical scenery and attractive leads, Return to the Blue Lagoon is as ridiculous as its predecessor, and lacks the prurience and unintentional laughs that might make it a guilty pleasure.

Return to the Blue Lagoon Photos

This sequel to the surprise box office hit The Blue Lagoon (1980) mimics its predecessor's romantic adventure formula of a lush tropical locale inhabited by scantily clad, nubile teens discovering their sexuality. Spotted adrift in a boat with his deceased parents Richard and Emmeline, a baby boy is rescued by a passing ship. Adopted by the widow Hargrove (Lisa Pelikan), infant Richard is soon at sea again after he, his new mother and her baby daughter Lilli abandon ship in the face of a cholera epidemic. Washing ashore on the same island populated by the first film's heroes, Hargrove protects and raises her young charges until a disease also claims her life. Years pass and both Richard (Brian Krause) and Lilli (Milla Jovovich) become young adults. While Richard discovers his manhood by racing a lagoon shark and spying on the island's dangerous natives, Lilli becomes a woman with her first period. Eventually their raging hormones lead the two into each other's arms. Marriage and a pregnancy follow, but Richard and Lilli's union is threatened by the arrival of a ship carrying a lovely captain's daughter (Nana Coburn) with eyes for the loincloth-clad Richard.

Emma James
as Lilli-as an Infant

Jackson Barton
as Richard-as an Infant

News & Interviews for Return to the Blue Lagoon

View All Return to the Blue Lagoon News

Critic Reviews for Return to the Blue Lagoon

Graham paints a picture of love that is tediously sexist. One for pervs and frustrated holidaymakers only.

The travelogue-style photography is soothing, the bodies are pretty and the music isn't offensive, but feature-length movies can't survive on the ingredients for a standard airline commercial.

Return to the Blue Lagoon is neither campy enough to be howlingly funny nor prurient enough to be provocative.

Jovovich is a beauty recalling the very young Myrna Loy, Krause is boyishly handsome; both are capable and should survive this particular shipwreck.

When an old scallawag spies on Lilli bathing naked in a waterfall, we civilized viewers are primed to condemn him. But we're all scallawags here.

Director Graham opts to virtually remake a film that was widely disparaged by critics, again presenting visualizations of puberty with a controversially youthful cast.

A textbook example of a disaster that amazingly manages not only to contain bad acting and an appalling script, but also some of the most unconvincing love scenes ever committed to film.

The lagoon is the locale to which this new movie disastrously returns.

The movie is occasionally cutesy. That's the worst of it. You can't call it gross, but it is cutesy.

At 15 years of age, I wanted to live inside this screen world of freedom and loinclothed abandon. Today, I wanted these kids to fall on some coral.

Audience Reviews for Return to the Blue Lagoon

Remember Brooke Shields and Christopher Atkins from The Blue Lagoon well, sadly, they died at sea. But happily their baby boy was saved. trouble is, the boat that rescues him has the plague so, he is set adrift again, this time in the company of a widow and her daughter. They end up stranded on the same island, where the widow raises them, dies and they grow up beautifully as Milla Jovovich and Brian Krause. The two teenagers have to fend for themselves and are soon drooling for each other too...

A sequel that I remember very little of, other than the fact that Milla Jovovich was in it.

This was really quite atrocious. It seemed to start off okay for a bad follow on to a movie that was probably ill advised to start with. But the minute the kids grew up and became Milla Jovovich and Brian Krause, it was all over. (Admittedly Brian Krause is not that bad, and may even be a slight improvement on the original star, but that's not saying a whole lot). The story totally lost the suspense the original had about who was on the other side of the island, the story is jumbled and unconvincing and don't even get me started on the "bad guys" who may or may not have been intended to be Australian. (As the film was shot here and i could clearly hear the accents, though they were trying not to sound it... I think) Big mess of a film. Milla can't act at all. If you really have to, watch the original instead.

One of the least welcome sequels ever about the son of the original castaways gets cast away himself on yet another tropical island with a pretty girl and her mother.

Return to the Blue Lagoon Quotes