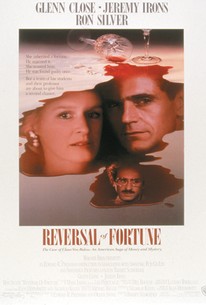 Critics Consensus: Featuring exceptional performances and a cunning script, Reversal of Fortune doubles as a tantalizing mystery and ruthless satire of the rich.

Critics Consensus: Featuring exceptional performances and a cunning script, Reversal of Fortune doubles as a tantalizing mystery and ruthless satire of the rich.

Critic Consensus: Featuring exceptional performances and a cunning script, Reversal of Fortune doubles as a tantalizing mystery and ruthless satire of the rich.

Barbet Schroeder's fact-based drama stars Jeremy Irons as Claus von Bulow, the infamous New York socialite accused of attempting to kill his wife Sunny (Glenn Close) with an overdose of insulin. (She slipped into a coma instead.) Ron Silver stars as Alan Dershowitz, Von Bulow's defense attorney; it is Dershowitz's book on which the movie is based.

Sarah Fearon
as Ala von Auersberg

Keith Reddin
as Dobbs
View All

News & Interviews for Reversal of Fortune

10 Hidden Gems of The Guardians of the Galaxy Vol. 2 Stars

View All Reversal of Fortune News

Critic Reviews for Reversal of Fortune

TV might make cautionary stick figures of Claus and Sunny. Reversal of Fortune treats them as if they were Noel Coward lovers gone to hell in a Lamborghini.

Irons' Von Bulow is easily the most attractive and entertaining movie heavy since James Mason`s villain in North by Northwest, a figure with whom he shares a taste for elegant homes and wry understatement.

Screenwriter Nicholas Kazan, director Barbet Schroeder and, especially, Jeremy Irons--in a glittering performance as the divinely decadent Dane--have chosen to treat this social death spiral as a tragicomedy of manners. It's an inspired tone.

The trial of Claus von Bulow has been turned into more of a rumination on the American criminal justice system with a strong focus on celebrity defense counsel.

This brilliant and outrageously entertaining film is a meticulous reenactment of one of the great dark-side-of-the-privileged sagas of our time.

It is a finely detailed manners study of the superwealthy, a drama of conflicting principles and values and an engrossing legal detective story.

Despite Silver's great energy, what's missing from the picture are the kind of insights necessary to explain any of the film's characters, including himself, in human terms.

Von Bulow is an enigma with a sense of humor, and that's exactly the way Irons plays him. Dershowitz is a man of exceptional cunning, and that's the way Silvers plays him. Their performances, and that of Close, will probably win Oscar nominations.

Barbet Schroeder directed the ingeniously made film, which weaves fact, hypothesis, and conjecture into a harrowing yet continually gripping and often highly amusing narrative.

Director Barbet Schroeder shoots The Great Gatsby-style setting with a documentary eye and gives the picture a deep sense of irony -- a quality enhanced by Irons's superb performance.

Audience Reviews for Reversal of Fortune

A passable TV drama that fails to focus on one specific genre, and offers a mixture of thriller, mystery & a bit of courtroom drama. The conventional dramatic execution limits its effectiveness. Not having much expectations probably saved me the miseries, and made it a passable fare. Edit: In retrospect, I feel it'd be justifiable to rate it 3/5 for what it is.

To spite the fact that this is a film based on real information regarding real events and people...this film comes across like one of those ridiculous, late night soap / dramas from the 80's. (Think Dynasty or Dallas). Everyone comes across as over-the-top caricatures. But who knows...perhaps these are accurate portrayals of the people they are meant to represent? In any case, it is a horrible and tragic story made all the more painful by these hammy, scenery chewing performances.

After Fisher Stevens' first scene, Jim said, "This movie is off the hook," and we couldn't even figure out what "off the hook" meant in this case, but it certainly is. From the campy yet seemingly true portrayal of moneyed debauchery, to Glenn Close's beyond-the-coma narration, to Jeremy Irons' deep-voiced, sometimes comical, accent. "Sawhny..." Good performances with a decent commentary on legality versus morality but slightly slow in parts.

"This is the most dangerous case I have ever worked on. --- I am breaking every rule."

Film adaptation of the book "Reversal of Fortune: Inside the von Bülow Case" by Alan Dershowitz, based on a true story.