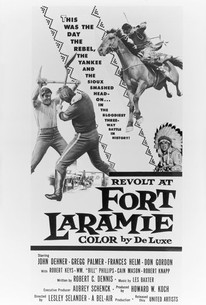 Revolt at Fort Laramie offers the old one about sworn enemies uniting to defeat an even more awesome foe. In this instance. The time is the Civil War: the place is a western cavalry outpost, where Union and Confederate sympathizers are forced to share close quarters. Not surprisingly, tensions erupt in a hurry, despite the honorable intentions of commander (and stalwart Southerner) John Dehner. But when indian chief Eddie Little lays siege upon Fort Laramie, Yanks and Rebels fight side by side. Harry Dean Stanton, then billed simply as Dean Stanton, makes his screen debut as "Rusty".

There are no featured reviews for Revolt at Fort Laramie at this time.