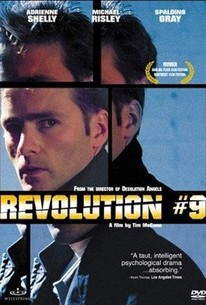 There's an old joke that goes "Just because you're paranoid doesn't mean people aren't out to get you," and this independent thriller puts a new and frightening spin on that notion. Jackson (Michael Risley) has a good job with a computer firm and a solid relationship with his fiancée Kim (Adrienne Shelly), but that begins to change one day when Jackson notices things on his desk aren't where they're supposed to be. Jackson wonders if someone is playing tricks on him when he starts getting vaguely threatening messages in his e-mail, and he sees a television commercial advertising a new fragrance for women, Revolution #9, that he's convinced is filled with messages directed specifically at him. Kim is worried that something is wrong with Jackson, and urges him to see a psychiatrist, but Jackson is convinced that someone is determined to hurt him. After his fears cost him his job, Jackson is diagnosed as suffering from paranoid schizophrenia, but he refuses to believe it, certain that the doctors are in cahoots with whoever has been after him, and he tries to track down Scooter McCrae (Spaulding Gray), the director of the TV spot for Revolution #9, in a bid to find out the truth about what's been happening. Revolution #9 was written and directed by Tim McCann, and premiered (in rough-cut form) at the 2001 Los Angeles Film Festival.

The characterizations and dialogue lack depth or complexity, with the ironic exception of Scooter.

If we sometimes need comforting fantasies about mental illness, we also need movies like Tim McCann's Revolution No. 9.

While the ideas about techno-saturation are far from novel, they're presented with a wry dark humor.

You get the feeling that the filmmakers did their homework and that they're here to represent a harsh reality."

So riddled with unanswered questions that it requires gargantuan leaps of faith just to watch it plod along.

The intense and penetrating performances of Risley and Shelly focus on the human costs of a mental illness. But the film, while grounded in reality, seems to rush to an abrupt conclusion.

Even through its flaws, Revolution #9 proves to be a compelling, interestingly told film.

A strong and confident work which works so well for the first 89 minutes, but ends so horrendously confusing in the final two

There is a strong directorial stamp on every frame of this stylish film that is able to visualize schizophrenia but is still confident enough to step back and look at the sick character with a sane eye.

This movie was very confusing, and the ending left me asking, "WTF?" It was interesting though, the parts I did understand anyway.

better than A Beautiful Mind; depressing but cares about the characters, McCann's great handheld work