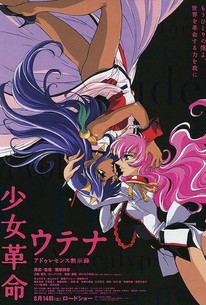 Based on the Japanese animated series of the same name, Revolutionary Girl Utena involves the plight of Utena into womanhood through fighting techniques and other physical drama. Sexual tension arises between Utena -- the girl who wants to become a prince -- and her friend Anthy, whose character is a more extroverted version of the way she appears in the series. Surreal and moody, the film depicts the strange entanglements of characters Tonga, Akio, and others, and its dream-like ending exceeds any comprehensible expectations. For the American version, English dubbing was supervised by the film's original director.

She turns into a racecar in the end. No, really.