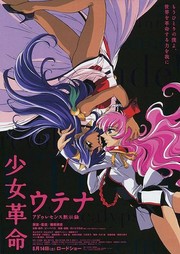 Joachim L
November 20, 2017
An unexpected blend of shoujou kitsch and surreal allegory, "Utena - The Movie" plays out like a CLAMP adaptation of David Lynch. It is stylistically impeccable and enthralling, but narratively clicheed and predictable. Its surreal edge manages to offset these trappings somewhat as the movie progresses, but never quite enough; the fact that the climax consists of a tiresomely drawn-out car chase sequence does not help. Additionally, problems established narratively are generally hard to solve allegorically (although Evangelion and the aforementioned David Lynch arguably proved that it CAN be done), and Utena mostly relies on this kind of solution - making it feel like a switch-and-bait which effectively deflates the value of such "solutions". All things considered, Utena makes for a beautiful and interesting viewing experience, but also for the most predictable surreal movie I have ever seen.

Ricky H
½ December 25, 2011
A very unusual and different take on the TV series, but with better visuals and a more convoluted plot, it's a much more interesting way to look at the property.

Matthew S
October 9, 2010
"Revolutionary Girl Utena: The Movie" is probably one of the strangest pieces of cinema out there. The animation is stunning, but the majority characters are undeveloped and the plot is simple to a fault. Essentially it's one person's transformation from a young-girl dream of a prince to lesbianism. With relatively well-done sword fights. And a boring car chase, that culminates in a battle with a castle on wheels. How could you make a car chase culminating in a battle with giant castle on wheels boring? This is the biggest mind-rape I've ever seen. Now, I'm not against symbolism, but you need a plot to affix it to. Maybe it would be better if you were a fan of the original series, but, as it stands, it's nowhere near the top of the anime pile. But if you just had a bit of LSD, then, maybe, just maybe, this would be absolutely stunning.

EDIT: After a few comments, and after realizing I was going well against the grain with my review, I feel it's only fair to mention I never saw the TV series of which this is a retelling of.

Stephanie R
July 19, 2010
While this movie is not a sequel nor prequel to the earlier created anime series, nor is it related to the story, Adolescence of Utena (this movie) would be greater appreciated and more understood if you watched the series. It has a whole new quite different tale compared to the anime, more like what Ikuhara and the rest of the Utena fan would have wanted to see in the story.

For a general review, Utena is a movie or series NOT to be taken literally. It blooms symbolisms everywhere (the colors, actions, words, ideals, etc.) from the inside world of Ohtori, breaking through and out to the "Real World" making young Utena and Anthy Himemiya adults. Living inside Ohtori is like a living dead, a doll. Break the eggshell to live. Ohtori seems like one big ball of fantasy of Prince and Princesses, of going through roles and fantasies, which all the characters are stuck on and cannot therefore move forward.

I've always and always WILL (for future remark) think Utena as a marvellous movie of art! It's like a completely original idea but still manages to be wonderful! Compared to the common heroes defeating villains in strenght, sword fights, etc. this movie made the characters race cars and rode even knowing all the corrupted and terrible things this world has to offer. They came out of their coffin, from living like a dead just hanging on fantasies, dreams, etc. to face reality.

This anime is not for everyone though, but philosophers would love this movie and anime! :)

We all had secret dreams and fantasies that we all wish we could just stay on and live there, specially when we were kids..

Curtis W
July 14, 2010
A beautifully rendered summarization of the gorgeous anime series of the same name, this movie does not dissapoint fans of the series or manga. With the student council members of Ohtori academy suffering from sexual miscommunication, unrequited dreams, and being forced to duel for the courtship of the schools' headmasters' daughters' boyfriends' sister(sorry that sounded sort of confusing) not a dry moment exists in this outstanding piece of cinema. But please note: IF YOU HAVE NOT SEEN THE SERIES, READ THE MANGA, OR EVEN HEARD OF REVOLUTIONARY GIRL UTENA, THEN YOU PROBABLY WILL NOT LIKE THE MOVIE, so please read into this series before watching the movie to fully understand its meta-physical adolescence allegory or you will probably get lost in it!

Xeiryn R
June 6, 2010
"Adolescence Apocalypse" what better title could signify the essence of this film? It is as it says an apocalypse to generic beliefs and nurtures the belief of individuality and liberation of people who realize that set values may not always be the truth to anything.

Utena Tenjou, a young girl, is a new student in Ohtori Academy. She is mistaken as a young man and seems alright with this illusion as she speaks that she desires to be a prince living for high ideals thus she wears a slightly modified boy's uniform and even appears in a masculine fashion.

She meets Anthy - a young woman who looks exotic and Indian. Anthy is the "Rose Bride" a trophy to those who win a strange set of duels to obtain a power to revolutionizing the world. Utena does not understand these duals yet is suddenly a participant.

The movie is a retelling of the original series thus some of the elements in the movie are consistent with the series. The world of Ohtori Academy is a mysterious place hanging, it seems, somewhere between subconsciousness and consciousness.

We have moving buildings, a garden suspended on a high floor and red and white and black seems to rub itself on the architecture. The artwork is exquisite and grabs your attention instantly including the characters' natures which can be said far from the accepted norms.

Utena begins her journey as a young women who believes she must be a man to have ambitious dreams thus dresses in an manly way and exhibits stereotypically accepted masculine qualities. However, it seems that this illusion interrupts her from accepting that she, as a strong woman that she is, can still attain her ambitious dreams and desires by accepting the fact that she is woman excluding her sex's accepted stereotypes.

She is not alone in her misconceptions but all other characters also deal with psychological dilemmas and insecurities. Every character, as many people in reality do, creates an illusion for themselves which instead of aiding them deteriorates them.

The psychological depth of this movie is captivating and it is transmitted through actions, symbolisms and statements. The characters may be not as they seem - they actually can step out of the image that is expected of them.

This is where the storyline possesses dark elements - if one is conservative about sexuality, incest, bisexuality and homosexuality then the movie might make them uncomfortable. The movie explores the dark sides of psychology, humanity and of course fairytales.

The series has always been called a postmodernist fairytale and the movie is not an exception - it dissects how we respond to the terminologies prince, princess and witch.

Aside from its great feats in being a postmodernist icon it does deal with Utena's transformation from stereotypes to a strong individual - a woman who can assess, analyze and accept her strengths and break out of illusions.

The movie's narrative takes an artistic approach which is abundant in symbolism thus it won't appeal to everyone. It deals with various philosophies that aren't mainstream but linked to people's desires and identities. Mostly, one might need some basic idea of the Utena universe to enjoy it - if one approaches with no knowledge they might become horribly confused and/or annoyed with the symbols.

Overall, the movie was a great experience. It had lush character designs and great dynamics, however, its plot might not appeal to everyone - aside from the themes it did retell a 39 episodes storyline in approximately 1hr and 45 mins. So it might seem to have left out some portions of depth present in the original series.

"Utena The Movie" is a masterpiece in its own right and a movie that should not be missed if one wants an out-of-the-box experience.

Mikage S
May 19, 2010
While not as engaging as the series, this film is still excellent! Utena works in symbols so a lot of the "weird" things (i.e. the racecar scene) are meant to be symbolic. The transformation into a car symbolizes actual movement and the breaking of the barrier between ohtori and the real world. Things no longer move in circles, but instead move forward. In other words, Utena and Anthy grow up.

Harts C
½ March 7, 2010
Wonderful and abstractly intelligent. You should watch the series first, but if you're into a trippy movie with beautiful picture. This is the movie for you.

Seabury N
½ January 10, 2010
This movie is admittedly a bit on the strange side. However, if you carefully followed the themes and symbolism in the TV series, then this movie should make sense to you. It is a revisitation of the premise and themes of the show, however presented in an alternate manner. It functions in synergy with the TV series, where it drives home points that weren't strongly expressed in the series, and the series provides most of what's missing in the film. Contrary to what other reviewers claim, it is perfectly in line with the series. And the artwork is beyond fantastic. Recommended for those who watched and understood the TV series.

Xenia L
July 2, 2009
Amazing film. It is scandalous, not only because of the sexuality topic twist, but also the way creators portrayed the symbolism of the story. LOVE IT, ADORE IT, and highly RECOMMEND

Christine H
February 5, 2009
This movie kinda picks up from where the series left off (only the charactors look a lil older, but very beautiful), only the movie retells the series. In the movie, it focuses more on the two main charactors (Utena and Anthy) from the series. You won't find much development in the other characters. The movie is visually beautiful. Love the sword fights and the car chase scene.

If lesbians and/or a 'lil ancest offends you, then this is not a movie to watch. But if it doesn't bother you, then go ahead and enjoy. =)
Page 1 of 9