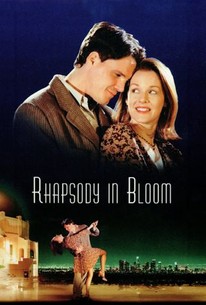 Craig M. Saavedra made his feature directorial debut with this romantic comedy-drama. After the death of her sister-in-law, Lilah Bloom (Penelope Ann Miller) began taking care of her brother Mitch (Ron Silver) and his three children. When Mitch meets career woman Debra (Caroline Goodall), Lilah confronts the possibility of life alone, but then she finds romance with musician Jack (Craig Sheffer). Conflicts arise when Mitch and Debra separate, Mitch assumes life will continue as before, but now Lilah has a newfound independence. Shown at the 1998 Cannes Film Festival.

Critic Reviews for Rhapsody in Bloom

There are no critic reviews yet for Rhapsody in Bloom. Keep checking Rotten Tomatoes for updates!

There are no featured reviews for Rhapsody in Bloom at this time.