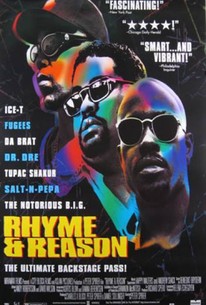 Rhyme and Reason features some of the biggest stars in rap music discussing the history and impact of hip hop and rap music. Director Peter Spirer takes a sociological approach to this primarily African American art form, focusing more on interviews and historical facts than on presenting examples of the diverse musical genre itself. Those offering insights include Ice-T, Chuck-D, KRS-ONE, Notorious B.I.G., and Wu Tang Clan. Female rappers Salt and Pepa, Da Brat and the Fugees' Lauren Hill offer their thoughts on rap music and misogyny. Also examined is the controversy over the violent lyrics found in gangsta rap. In the film's latter stages, the filmmakers attend rapper Tupac Shakur's funeral.

This is an interesting capsule of a time and place that's still relevant in both good and bad ways.

There are no featured reviews for Rhyme & Reason at this time.