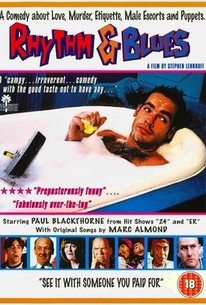 Stephen Lennhoff directs this low-budget comedic thriller set in London's seedy gay male escort scene. John (Paul Blackthorne) leads a lonely existence until he is picked up by a Scottish skinhead junkie (Ian Henderson) and introduced to the Boys Galore escort agency, run by the ever-mincing Mitzi (Gary Fairhall) and middle-aged Bethsheba (Sue Tilling). John is promptly hired out by sleazy American millionaire Bad Daddy (Angus McIness), who lives in a palatial estate. Later, in one of the fews scenes in which he's not soaping up in the bathtub, John is threatened by a psychopathic rent boy slasher. ~ Jonathan Crow, Rovi

There are no critic reviews yet for Rhythm & Blues. Keep checking Rotten Tomatoes for updates!

There are no featured reviews for Rhythm & Blues at this time.