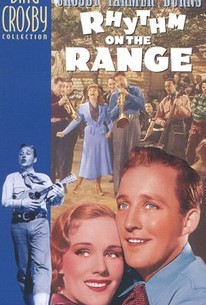 Rhythm on the Range Photos

Bing Crosby's only western (outside of the 1966 version of Stagecoach), Rhythm on the Range stars Crosby as a casual cowpoke on his way back to the Wide Open Spaces after an eastern visit. He meets a young train stowaway (Frances Farmer), whom he regards as a hoydenish vagabond until learning that she's the owner of the ranch where he works. Farmer resists Crosby's charms until he rescues her from a gang of rustlers. Among the supporting cast is Mischa Auer, Bob "Bazooka" Burns, and, in her film debut, 19-year-old Martha Raye. The film also introduces the song hit "I'm an Old Cowhand", which is sung at one point or another by everyone in the cast, including Russian-born Mischa Auer. Rhythm on the Range was remade in 1956 as Pardners, with a few minor alterations--notably the casting of Jerry Lewis in the Frances Farmer role!

Critic Reviews for Rhythm on the Range

Audience Reviews for Rhythm on the Range

I don't know about you, but I had a hard time believing Crosby could be a cowboy, he's just not the type. This movie, and Crosby's performance are pretty silly. There are some funny scenes, but for the most part it's kinda stupid.

Rhythm on the Range Quotes