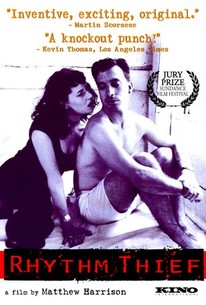 This drama, set in the gritty areas of New York's Lower Eastside and filmed in black and white, focuses upon the lonely and often pathetic lives of the down and out. Simon is a hustler who makes a minimal living by selling boot-leg homemade recording of underground metal-leather bands. He lives a grim life in dirty flat. He prefers solitude but has frequent and unwelcome visits from his girlfriend, a street dweller that wants to emulate him, and Shayme a junkie. The dull routine of his gray life is interrupted by a visit from a young woman from his hometown in Long Island. She is a former mental patient who was hospitalized in the same place as Simon's mother. Seeing her, brings up many unresolved feeling in Simon. Together they go to Far Rockaway, but Simon cannot deal with it and returns to the city for the movie's tragic ending.

A time capsule for the street life of the ungentrified Lower East Side-and the meanness of those streets is the engine of its drama.

It's a heavy slog through hell that has a raw energy.

Matthew Harrison's low-budget indie is a stunning debut and guerrila filmmaking at its best.

There are no featured audience reviews yet. Click the link below to see what others say about Rhythm Thief!