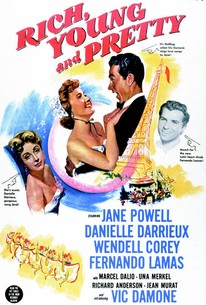 Rich, Young and Pretty succinctly describes Jane Powell, the heroine of this frothy MGM musical. Vacationing in Paris with her father, Jim Stauton Rogers (Wendell Corey) -- a cattle baron-turned-politician, Elizabeth Rogers (Powell) falls in love with handsome Andre Milan (Vic Damone, in his film debut). She also learns to her surprise that her Gallic mother, Marie (Danielle Darrieux), is not dead as she's been led to believe, but very much alive and very much involved with suave South American Paul Sarnac (Fernando Lamas). The plot is merely there to provide breathing space for the film's ten -- count 'em, ten -- musical numbers. If Rich, Young and Pretty resembles a Deanna Durbin picture at times, it may because it was produced by Durbin's discoverer, Joseph Pasternak. ~ Hal Erickson, Rovi

There are no critic reviews yet for Rich, Young and Pretty. Keep checking Rotten Tomatoes for updates!

Pleasant bit of fluff with Wendell Corey surprisingly singing a few songs. The script makes little sense but is played sincerely by the cast, although a little more Una Merkel would have been welcome. Jane and Danielle Darrieux really do look like they could be mother and daughter.