Richard Garriott: Man on a Mission2012 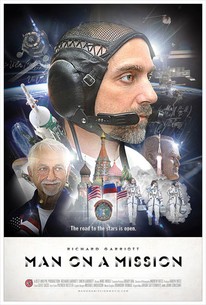 Best known as the father of early computer games like Ultima and Ultima Online, Richard Garriott always wanted to follow in his astronaut father's footsteps. But when eye problems made a career at NASA impossible, he turned to private space travel to make his dream come true. Man On A Mission captures everything from Garriott's training in Russia to his launch aboard the Russian Soyuz spacecraft, as well as life aboard the International Space Station, resplendent views of the earth from space, and a never-before-seen view from inside the capsule during the fiery re-entry to Earth. -- (C) Official Site

News & Interviews for Richard Garriott: Man on a Mission

View All Richard Garriott: Man on a Mission News

Critic Reviews for Richard Garriott: Man on a Mission

This documentary reaches for the stars but never grabs hold of them, and for as much as I can relate to Garriott's dreams watching him realize them almost put me to sleep.

Garriott's story is unique, a stranger-than-fiction tale that is unlikely to be topped. And the images from space - crisp, spectacular, haunting - make it worth the trip.

A self-made gaming mogul with a flair for theatricality buys himself a $30 million ticket to space via a Russian Soyuz craft.

It's a bit precious in its narcissistic point of view, but still a kick to watch the hopelessly devoted astronaut wannabe fulfill his wildest dream.

Completely lacking in imagination and purpose, this vanity project might suffice as a home movie, but it's hardly worth the expense and bother of seeing it in a theater.

"Man on a Mission," the most expensive home movie ever made, is one man's genial account of his trip into outer space.

Truly one of the best documentaries on space travel that we earthbound mortals will experience for some time to come.

A genius at making money with computer games, space tourist Garriott will recoup little from this cartoon of a space adventure.

Revenge of the computer geek!

Timid documentary tags along on a man's $30 million ride into space without probing deep enough to provoke awe, insight or emotional involvement.

A must-see for stargazers of all ages.

The film summons up the childlike wonder and optimism inherent in space exploration, while examining how it's opening up to self-funded travelers.

Audience Reviews for Richard Garriott: Man on a Mission

There are no featured audience reviews yet. Click the link below to see what others say about Richard Garriott: Man on a Mission!