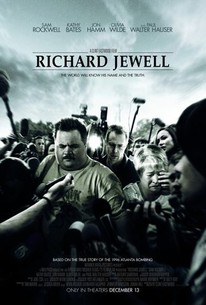 Directed by Clint Eastwood and based on true events, "Richard Jewell" is a story of what happens when what is reported as fact obscures the truth. "There is a bomb in Centennial Park. You have thirty minutes." The world is first introduced to Richard Jewell as the security guard who reports finding the device at the 1996 Atlanta bombing-his report making him a hero whose swift actions save countless lives. But within days, the law enforcement wannabe becomes the FBI's number one suspect, vilified by press and public alike, his life ripped apart. Reaching out to independent, anti-establishment attorney Watson Bryant, Jewell staunchly professes his innocence. But Bryant finds he is out of his depth as he fights the combined powers of the FBI, GBI and APD to clear his client's name, while keeping Richard from trusting the very people trying to destroy him.

Deja Dee
as Woman in Park

Where it falters - and badly - is in its portrayal of real-life reporter Kathy Scruggs. It leaves a bitter taste and mars the whole package, undermining its own good work elsewhere.

The story Eastwood is telling here is indeed a compelling one, a real-life drama recounting the abuse of power by the two most powerful institutions in America, the government and the press.

Eastwood's "shut up and point the camera" style of storytelling is bluntly effective and the film is powered along by three terrific performances.

This is, frankly, a political film and it's no secret that Eastwood is not exactly on the left, but, ever the pragmatist, he leaves room for multiple readings.

It's not Eastwood's finest hour.

One of Clint's most memorable characters, and a picture as well rounded and engaging as he's crafted in years.

The brief but powerful investigation of Richard Jewell remains a stain on law enforcement and media. But in his eagerness to show how badly they transgressed, Clint Eastwood has prevented his film from being as powerful as it could have been.

The best film of 2019 to include a Macarena dance scene.

The veteran director creates one of his best films in years with this powerful true story...

A mostly successful return to form for Eastwood that overcomes its questionable characterizations and flawed execution of its arguments thanks to great performances and an incisive look on heroism.

There are no featured reviews for Richard Jewell at this time.