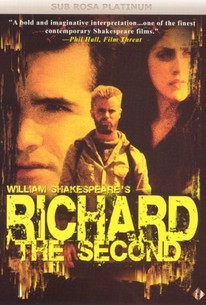 The Bard goes digital as independent director John Farrell brings William Shakespeare's +Richard the Second to the screen for the first time ever while simultaneously upping the creative ante by telling the digital video-shot tale in modern dress. Even in modern times Shakespeare's tale of political intrigue and a reckless king who loses it all still resonates powerfully, and with a cast that includes such emerging talents as Frank O'Donnell, Katina Delejade, Matte Osian, and Tom Turbiville, this film shows just how timeless the enduring playwright's words truly are.

Critic Reviews for Richard the Second

It's a powerful Shakespeare play that was well presented.

Excellent adaptation of the Shakespeare tragedy.

There are no featured reviews for Richard the Second at this time.