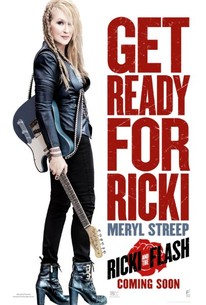 Ricki And The Flash Videos

Ricki And The Flash Photos

Three-time Academy Award (R) winner Meryl Streep goes electric and takes on a whole new gig - a hard-rocking singer/guitarist - for Oscar (R)-winning director Jonathan Demme and Academy Award (R)-winning screenwriter Diablo Cody in the uplifting comedy Ricki and the Flash. In a film loaded with music and live performance, Streep stars as Ricki, a guitar heroine who gave up everything for her dream of rock-and-roll stardom, but is now returning home to make things right with her family. Streep stars opposite her real-life daughter Mamie Gummer, who plays her fictional daughter; Rick Springfield, who takes on the role of a Flash member in love with Ricki; and Kevin Kline, who portrays Ricki's long-suffering ex-husband. (C) Tristar

Anna Robertson
as Mother of the Bride

Tony Costa
as Father of the Bride

News & Interviews for Ricki And The Flash

View All Ricki And The Flash News

Critic Reviews for Ricki And The Flash

[Ricki And The Flash] carries a maturity that her earlier films lacked... Despite that, the movie ends in a syrupy sweet reconciliation.

Streep makes us care about Ricki even when she's being a stubborn jerk. It's another astonishing performance by her, in a film just good enough to deserve it.

Its twinkly ads take pains to exclude its more compelling thematic elements. But they're there, and worth seeking out through the fog of the other stuff.

Ricki's life may be chaotic but the film hits the high notes when it counts, in rambunctious, crowd-pleasing fashion.

Without Streep at its centre, this might have seemed a flimsy confection. But she plays the rock singer with the utter conviction and fearlessness that she brings to all her roles, however unlikely they seem.

Once you get past all that A-list glitz and heavyweight talent, damn if this shindig isn't lacking something in the lustre department.

Ricki and the Flash is stale, slapdash filmmaking-with the inevitable incorporation of identity politics-and largely a placeholder.

The truth is that there are a handful of performers who make nearly everything they do better. Streep is one of these performers.

I liked it. I didn't hate this movie... I was passively watching it.

It's a mediocre melody made infinitely better by those that playing it.

A predictable film, topical, without big surprises, that walks on paths more than explored, and that barely reminds Jonathan Demme's style. [Full Review in Spanish]

Audience Reviews for Ricki And The Flash

For Meryl Streep fans only. And then after at least half a bottle of vino. Or a joint. Or both. Yeah, both.

Okay drama of aging rocker trying to be there for her family after many years away isn't bad but goes on about ten minutes longer than it should.

A down-and-out, estranged mother comes back into the lives of her upper-middle-class children, ex-husband and his perfect second wife (played by perfect Audra McDonald, naturally). She wins them back through music, and it's really just so much fun. I know Meryl Streep is lauded as the best dramatic actress of her generation, but I've always thought the grand dame a bit stuffy and boring. Perhaps that's why I liked her departure into blue-lidded, Alanis-braided, tatted-up, has-been rockstar. The thing is, Meryl Streep ISN'T a badass; she dabbles in it, as does her character Ricki whom she plays as appropriately lost and hopeful and distant and maternal. She performs the mellow, classic rock selections better than the (possibly altered) mezzo belting of the Witch in "Into the Woods" and the tinny pop of Donna in "Mamma Mia." It's unfortunate that Streep breaks her streak of annual Oscar nominations, seeing as most critics found her performance campy and the movie predictable. Oh well. Mamie Gummer, Streep's doppelganger daughter, is a bit one-note ragey and one-note catatonic, but her Resting Bitch Face is intensely formidable, and I like the casting of real life family members in movies.

Decent, but got to admit, thought it might be a little better than it was. Meryl is great in it, and I loved her look. I would like to watch this one again before reviewing properly.

Ricki And The Flash Quotes