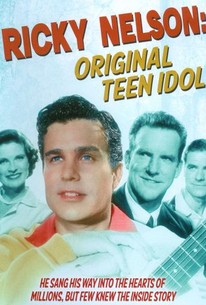 The life and career of Ricky Nelson--from awkward kiddie TV star to teenaged singing idol to "young hasbeen"--is adequately encapsulated in this made-for-cable movie, one of several celebrity biopics produced for VH-1. Told in flashback as Ricky Nelson (Gregory Calpakis) recounts his experiences to a worshiping fan in the last hours before the 1985 air crash that would take his life, the story begins around 1952, as the adolescent Ricky is recruited by his bandleader-producer father Ozzie Nelson (Jamey Sheridan) to play "himself" on the movie and TV version of the popular radio series The Adventures of Ozzie and Harriet. Anxious to crawl out from under the shadow of his dictatorial father Ozzie, his vocalist mom Harriet (Sara Botsford) and his marginally more talented older brother David (Anthony Lemke), the 16-year-old Ricky begs for a chance to sing on the family's series. The wildly enthusiastic audience response to Ricky's warblings prompt Ozzie to aggressive promote Ricky's musical career, but ultimately Ricky breaks loose from the family's influence to strike out on his own. Alas, after several years at the top, Ricky's career and fan following plummets, before he has reached his 30th birthday he is grasping at straws by performing at county fairs and trade shows. Making matters worse is his unhappy marriage to Kris Harmon (depicted as something of a conniving opportunist by Anne Openshaw) and his ever-increasing dependence upon drugs. Astonishingly, the film never allows us to hear Ricky perform "Garden Party", the song that enabled him to make a spectacular comeback. Ricky Nelson: Original Teen Idol first aired on August 22, 1999.

There are no critic reviews yet for Ricky Nelson: Original Teen Idol. Keep checking Rotten Tomatoes for updates!

There are no featured reviews for Ricky Nelson: Original Teen Idol at this time.