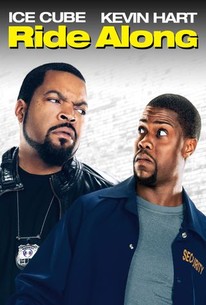 Critics Consensus: Kevin Hart's livewire presence gives Ride Along a shot of necessary energy, but it isn't enough to rescue this would-be comedy from the buddy-cop doldrums.

Critics Consensus: Kevin Hart's livewire presence gives Ride Along a shot of necessary energy, but it isn't enough to rescue this would-be comedy from the buddy-cop doldrums.

Critic Consensus: Kevin Hart's livewire presence gives Ride Along a shot of necessary energy, but it isn't enough to rescue this would-be comedy from the buddy-cop doldrums.

Kevin Hart and Ice Cube lead the lineup in Ride Along, the new film from the director and the producer of the blockbuster comedy Think Like a Man. When a fast-talking guy joins his girlfriend's brother-a hot-tempered cop-to patrol the streets of Atlanta, he gets entangled in the officer's latest case. Now, in order to prove that he deserves his future bride, he must survive the most insane 24 hours of his life. For the past two years, high-school security guard Ben (Hart) has been trying to show decorated APD detective James (Cube) that he's more than just a video-game junkie who's unworthy of James' sister, Angela (Tika Sumpter). When Ben finally gets accepted into the academy, he thinks he's earned the seasoned policeman's respect and asks for his blessing to marry Angela. Knowing that a ride along will demonstrate if Ben has what it takes to take care of his sister, James invites him on a shift designed to scare the hell out of the trainee. But when the wild night leads them to the most notorious criminal in the city, James will find that his new partner's rapid-fire mouth is just as dangerous as the bullets speeding at it. John Leguizamo and Laurence Fishburne join the cast of the action-comedy directed by Tim Story. Ride Along is produced by Will Packer (Think Like a Man), alongside Ice Cube, Matt Alvarez (Barbershop) and Larry Brezner (Good Morning, Vietnam). (C) Universal

News & Interviews for Ride Along

View All Ride Along News

Critic Reviews for Ride Along

Nothing in the movie makes sense, but I prefer to think that "Ride Along" is just a badly told joke, rather than an insult to its audience.

It's a typically absurd, exaggerated spiel but with a grim undertone that resonates later on, so that Ben's desperate efforts to make something of himself seem not entirely a laughing matter.

An action-comedy short on both action and comedy, this turgid dirge recycles all the usual mismatched cop-couple cliches (from 48 Hours to Cop Out) with dreary results.

As buddy movies go, this is strictly formulaic fare but it elicits a few laughs along the way thanks to the relentless goofing of Kevin Hart.

The inappropriately namedTim Story looks to have grabbed his script from the "plot" section of the service station while racing to a meeting for which he had not properly prepared.

Ice Cube is a man with two expressions, while Hart has become a ubiquitous presence.

Standard-format American cop comedy, where an intractable veteran (Ice Cube) is forced to suffer a day on the job in the company of his distractable brother-in-law-to-be (Kevin Hart).

The film's only joy, unless you actually enjoy Hart's mania, is watching master thespian Laurence Fishburne.

Moderately funny, "Ride Along" never progressing beyond its basic gag.

If your eardrums can take it, Ride Along is perfectly inoffensive, incredibly unrealistic, adequately paced, completely forgettable, and (somehow) a massive success Stateside.

When an unstoppable force meets an immovable object you get Ride Along, the seldomfunny buddy movie starring Kevin Hart and Ice Cube.

This is a film rife with buddy comedy/opposites collide/fish-out-of-water clichés that by now have been done to death and so fail to really register on any level let alone a comedy one.

Audience Reviews for Ride Along

2014 may be Kevin Hart's year when it comes to comedy. He has been fantastic. Between "Grudge Match"(which was technically a Dec '13), "About Last Night" and now "Ride Along" the guy is on a tear. He is hilarious, and probably the most consistently funny comedian working today. Even if he plays the same character in all his movies, it's a very funny character. He and Ice Cube play off each other very well, and I'm sure there will be some sequels. Hopefully they will be just as funny, which I'm sure they will be. This is one of the funniest buddy cop movies to come out in a while, that at times is cliched, but Hart makes it work. If you don't like Hart,. then this isn't for you. But if you are a Kevin Hart fan, then I don't know how you can't like this movie. May not be something that will be considered a classic or anything, but definitely still worth a watch for some laughs.

I swear all the funny scenes were in the trailer, it was funny in some scenes but Ice Cube is hit or miss in his methods to be funny or play straight. Kevin Hart was funny in a few scenes but unfortunately whatever energy and enthusiasm he had was not in anything else, probably due to the lack of chemistry between him and Cube and the director most certainly forgot to add any energy or fun to keep it entertaining

An average cop comedy, your taken on an amusing ride along nothing more nothing less.

Propose to this cop's sister? Rookie mistake. Good comedy! As expected, the film plays out like a typical buddy-cop comedy: a cop teams up with someone he doesn't like or agree with and the two have to attempt to get along. While this basic plot line has indeed been done to death, this film makes the fortunate decision to skip out on many movie clichés. The jokes are delivered on a regular basis and never stray too far into campy or mean-spirited territory. Unlike films like "Identity Thief" and "A Madea Christmas," the tone of the film never strays from a comedic romp and always keeps the laughs coming. "Ride Along," may not go down as a comedic legend, but in my eyes, it is certainly worth checking out at least as a rental. The flawed script can indeed be overlooked by the gleeful dialogue and Kevin Hart's enthusiasm. I'd say give it a shot, it wouldn't hurt to check it out. Fast-talking security guard Ben joins his cop brother-in-law James on a 24-hour patrol of Atlanta in order to prove himself worthy of marrying Angela, James' sister.