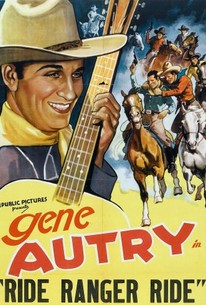 Gene Autry joins up with the Texas Rangers in this Republic musical western. He and his saddle pal Frog Millhouse (Smiley Burnette) are assigned to guard a wagon train during its trek to California. Undermining his efforts is Indian interpreter Tavibo (Monte Blue), who is in reality a crook named Duval. Hoping to lead the wagon train into a trap, Tavibo/Duval hasn't counted on the resourcefulness of Autry, who's as handy with a six-gun as with a guitar. Incidental music is provided by the Tennessee Ramblers, a then-popular musical aggregation.

There are no critic reviews yet for Ride, Ranger, Ride. Keep checking Rotten Tomatoes for updates!

There are no featured reviews for Ride, Ranger, Ride at this time.