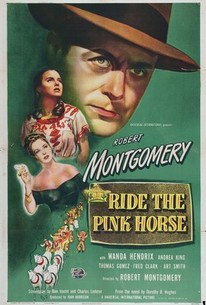 Robert Montgomery directed and starred in this exotic film noir set during a New Mexico fiesta. Montgomery plays a secretive ex-GI who plans to extort money from a prominent gangster (Fred Clark) as retribution for the death of Montgomery's best friend. An FBI man (Art Smith) would like the government to get the incriminating information on the gangster that Montgomery is carrying. Trailed by the FBI agent, Montgomery takes refuge at an old carousel, where he meets a Mexican gamin (Wanda Hendrix) who refuses to leave his side. The girl is on hand when the gangster catches up with Montgomery and has him beaten. She nurses Montgomery back to health, but the would-be blackmailer is determined to confront the gangster again. This time, however, the FBI agent comes to the rescue. Ride the Pink Horse is a properly moody melodrama, containing one of the few truly good performances from eternal ingenue Wanda Hendrix. The film was remade for TV in 1964 as The Hanged Man.

Jack Worth
as Thug

If a director's job is to come up with creative ways to convey who characters are and the deeper meaning of their circumstances, Montgomery earns a gold star.

The film is both tough and touching, with crackling dialogue (scripted by the great Ben Hecht and Charles Lederer) and stylized scenes...

The plot isn't the attraction here; instead, it's the intriguing relationships between the characters, the black-and-white camerawork by the great Russell Metty (Touch of Evil, Spartacus), and the scintillating performances by all concerned.

An under-seen but highly-recommended film.

the actor robert montgomery both directs and stars in this noir set in the new mexican desert. haunting images, mysterious characters, hard-boiled dialogue, yet all is not as cynical as it first seems. a powerful film with delicious atmosphere