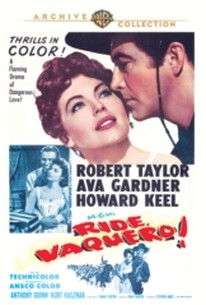 Vicious outlaw Jose Esqueda (Anthony Quinn) lives by what he calls the law of the bullet, terrorizing ranchers in post-Civil War Texas. At his side is his longtime enforcer and gunman, his adopted brother Rio (Robert Taylor). But Rio's allegiance, already wavering, may change for good after he meets recently arrived rancher King Cameron (Howard Keel) and after he finds that King's stunning bride (Ava Gardner) is drawn to him. In the same year as this brooding, brawling tale of the West, versatile star Robert Taylor would be seen in other virile roles as a man of the sea in All the Brothers Were Valiant and as valorous Lancelot in Knights of the Round Table. John Farrow (also busy that year seeing action with Botany Bay, PlunderUnder the Sun and the especially impactful Hondo) directs.

Average western with stiff performances from most of the cast perhaps trying to compensate for Quinn who is in full on hambone mode here.