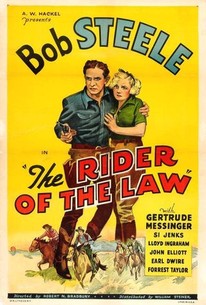 An average entry in Bob Steele's Western series for Supreme Pictures, The Rider of the Law casts the diminutive star as Bob Marlow, an Arizona lawman trailing the six Tolliver brothers, a gang of outlaws engaged in blackmailing the local banker in Apache City. To get the goods on the brothers, Marlow disguises himself as a foppish Easterner, thus gaining access to the gang's mountain hideout. The shooting starts when Marlow's true identity is revealed. Former child star Gertrude Messinger plays the heroine and the six outlaws are portrayed by Earl Dwire, Chuck Baldra, Sherry Tansey, Tex Palmer, Steve Clark, and Jack Kirk, experienced blackguards all. Robert North Bradbury, Steele's real-life father, directs as usual.

John Elliott
as The Orator

Art Dillard
as driver
View All

Critic Reviews for Rider of the Law

There are no critic reviews yet for Rider of the Law. Keep checking Rotten Tomatoes for updates!

There are no featured reviews for Rider of the Law at this time.

Rider of the Law Quotes