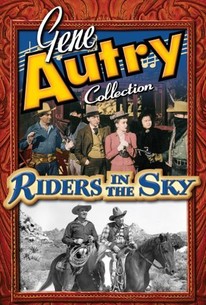 Riders in the Sky Photos

Gene Autry enjoyed considerable success with his recording of Stan Jones' haunting "Riders in the Sky". He then parlayed this success into a film, which proved to be one of Autry's best postwar efforts. The basic plot concerns Autry's efforts to clear rancher Ralph Lawson (Steve Darrell) of a trumped-up murder charge. The trumper-upper, Rock McCleary, is played by Robert Livingston, a former cowboy star who turned to character roles late in his career. The heroine is played by Gloria Henry, ten years removed from her TV fame as Alice Mitchell in Dennis the Menace. The title song is imaginatively staged by director John English, with a ghostly Tom London riding hard and fast as a montage of moody images play across the screen. So effective was this vignette that Columbia included it in the coming-attractions trailer for Riders in the Sky. ~ Hal Erickson, Rovi

Boyd Stockman
as Guard with Rifle

Robert Walker
as Townsman
View All

Critic Reviews for Riders in the Sky

There are no critic reviews yet for Riders in the Sky. Keep checking Rotten Tomatoes for updates!

Audience Reviews for Riders in the Sky

There are no featured audience reviews yet. Click the link below to see what others say about Riders in the Sky!

Riders in the Sky Quotes